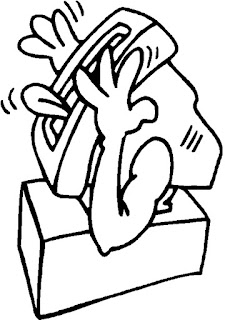 Call centres and company website help services ... Over the past three weeks, Virgin Media has managed to block my email account three times which has caused hours of frustration trying to phone, waiting for a response and then getting nowhere when eventually I get through to a human being. They offer a temporary fix and tell you to change your password. Admittedly some call centre operators are more helpful than others, but it's finding the ones that actually do care about their customers that is the difficulty.

That leads to the next seemingly deliberate ploy to annoy and frustrate. The security question asked for the name of my first car. Something I am completely unlikely to forget but the machine tells me I'm wrong. For #*+?'s sake I should know what I drove better than any bluidy machine!

When that fails, the next question is to provide them with details of the most current bill. Even when the details are meticulously entered and checked, the machine comes back with the message telling me it is wrong. It even told me my mobile phone number was wrong when I'm holding the bluidy thing in my hand.

By this time the blood pressure was close to blowing a V8 sized gasket and I was getting nowhere fast, or even slow. The machine ground to a halt  and offered no more alternatives. That was it. The job was done as far as it was concerned. It was obviously all the customer's fault.

The trouble is that modern call centres are seemingly staffed by a generation who were raised on computers and smart phones and have little knowledge of how society evolved and was successfully managed in the High Street face to face, telephone, typewriter and Royal Mail days. It's the same with company websites. There is an arrogant assumption that everyone has access to the internet and knows how to use it.

First they require you to go through their 'Frequently Asked Questions' to resolve the query whilst completely disregarding the fact that you may have come up with a brand new 'not so frequently asked question'! These complex electronic questionnaires appear to have been designed by sadists who are computer literate but have lived life in a  darkened room lit only by the glare of countless screens.

And the worst part? When you do actually get to speak to a human being, they are so reliant on the 'accuracy' of their own machines and software, that it is the customer who is always wrong. Changed days, eh? Grrrr!

Somewhere along the line there are a number of overpaid executives sitting in centrally heated, overstuffed comfort counting their sales, salaries and bonuses at the expense of customer service - remember the Post Office scandal? It used to be ambition that drove people on, now it's just greed.

It won't be long now before the machines do indeed take over the world and the human race as a species is doomed. Methinks the machines have in fact started the process but those who are supposedly in control, are in fact the ones who are being controlled! Spooky, eh?