The Future of Forest Rallying? 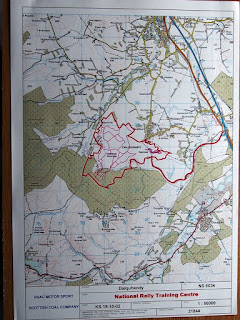 Once upon a time, 20 years ago, a small group of motor sports enthusiasts had a most wondrous idea. Had it been taken up then, perhaps forest rallying wouldn't be in quite such a precarious state as it seems to be now.

Recent posts on this page have expressed concern about the future of forest rallying in Great Britain. This followed the publication of last year's Motorsports Review by Forestry England, which although not quite damning, fell short of being supportive. So far, there have been no puffs of ominous white smoke from Forest & Land Scotland's HQ chimney.

Inspired by the imminent closure of a 1990s opencast coal mine in South Lanarkshire, the idea was to convert it into a 'National Rally Training Centre', itself part of a bigger idea for an 'Outdoor Pursuit Centre'. This huge facility was adjacent to the A74 (M) motorway in South Lanarkshire and had its own motorway junction. Ideal for access.

An approach was made to Scottish Coal as the site owners who actually became quite excited about the idea. Not just for any altruistic ambition, but with a financial incentive as they had set aside funds for the re-constitution of the site once the coal had been extracted and this idea would have minimised their cost!

There was also the prospect of support from the Strathclyde European Partnership which was making huge investment in the area from the dis-used Gartcosh and Ravenscraig steelworks to the World Heritage site at New Lanark and this sporting development scheme had a certain appeal.

The local Member of the Scottish Parliament and  South Lanarkshire Council were onboard and indeed the local councillor was a motor sports fan.

And that's where this idea ticked all the boxes. By calling it an 'Outdoor Pursuit Centre', it could have been used all year round for a number of activities, not just motor rallying, 4x4 events, autotests, trials and off-road motorcycle sports, but other sports such as mountain biking, orienteering, clay pigeon shooting, archery, equine events and cross country running as well as water sports on the lochan in the centre of the site. A safe and secure site for all ages from school children and teenagers to adults.

On-site facilities would have included offices, lecture suites and garages which could be used to train sports officials and marshals. The plan was to make this a revenue earning 7 day a week facility which would earn its keep and subsidise sports training and development.

Even the Police, Fire and Ambulance services were interested in using the site for 'Major Incident' planning and practice. One other thing, the Forestry Commission itself expressed an interest in using the facility as a central training venue for staff!

A feasibility study was commissioned from a professional consultancy, and it was all looking good. What wasn't included in the planning at this stage was the fact that there was a substantial amount of private investment ready and waiting to get the show on the road before any public money was released, but that investment was conditional on MSA support for the proposal.

On that basis the Chief Exec of the Motor Sports Association wanted a site visit. It was February. It was cold, wet, grey and dreich. Just what you would expect in Scotland at the tail end of Winter but the visitor arrived with his MSA anorak and shiny shoes to inspect what was still an open cast coal mining site! The bumpy trip around 'the sights' in a Scottish Coal LWB Defender did little to improve the mood.

It would appear that following this visit, the MSA had the 'unique and bright idea' of creating an off road motor sports academy complex  in south Wales although this had not been mentioned publicly. Draw your own conclusions. That didn't happen either.

We missed our chance, and now it's a wind farm. And folk wonder why I'm so cynical.

Anyway, the basic idea could still work although it would require leasing or buying a suitable forest and collaboration with Forest & Land Scotland - they get the timber and we manage the roads and jointly manage the plantation. Simples, eh?

Of course it wouldn't be simple, but the idea still has merit, does it not?