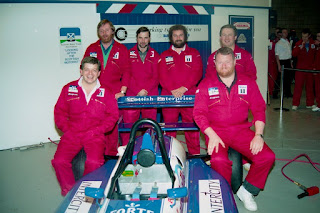 You may have noticed the occasional publishing of historic foties on this very page, often without captions or identifying the persons depicted therein. This is deliberate. Not because the names and identities have been forgotten, but rather more out of a fear of physical violence being perpetrated on the revered author of such posts for daring to publish such personal, and perhaps occasionally embarrassing, images.

By not revealing such details, ignorance can be claimed and authorship denied!

Nope, the real reason is that it is much more fun to recognise the faces and try to remember the names yourselves, is it not?

In this case, these photographs were taken at the 1993 Scottish Motor Show held in the SECC in Glasgow. 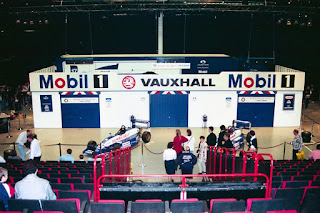 One of the 'star' attractions at the Show that year was the 'Jackie Stewart Pit Stop Challenge' where teams of amateurs from all walks of life, including many car clubs, and some 'professional' outfits took part in a competition against the clock to change all four wheels on a Formula Vauxhall Lotus racing car.

The competition took place in an auditorium in one of the SECC's huge halls where a pretty professional stage display depicting two pit stop garages had been constructed. And although the competition title bore testament to 'racing royalty' it wasn't JYS who undertook the staging of this competition. Nope, much of the donkey work was left to an impressionable young (-ish?) motor sports journalist! 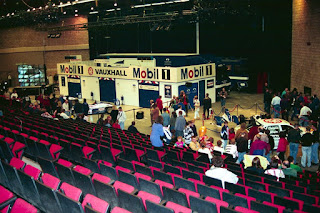 Never were so many wheelstuds sheared and threads stripped, knuckles skint and sweat poured, or in the case of some teams, nails broken and genteel perspiration, all in the pursuit of glory and royal patronage. For indeed, it was the Princess Royal herself who dished out the trophies on Finals Day.

Amongst the teams were this lot, and no they didn't win. Coming from the dark depths of industrial Lanarkshire, it had to be explained to the 'Bears' in words of one syllable (or less) plus a few descriptive grunts that hydraulic jacks had to be used. Simply lifting the car off the deck by hand was not allowed. Also torque wrenches had to be used - over tightening by fingers was not permitted!

Ah, such innocence. They were indeed much younger then, but most of them are readily identifiable today, are they not? Although in the interest of personal safety, I have no idea who they are.

And yes, there are indeed more photographs! 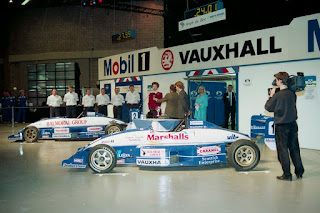