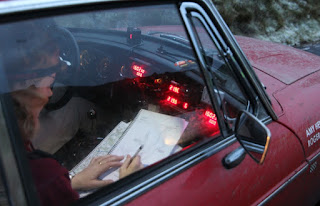 Rallying is going to look pretty different when it finally gets the green light. It's not just the lack of venues that worry some clubs but the lack of manpower, in organising teams and on the stage.

With that in mind some of the brighter elements within motorsport are coming up with alternatives to Marshals - the Virtual Marshal!

Nope, it's not quite R2D2 or C-3PO standing by the roadside with digital clocks receiving timecards and handing out times. It's even cleverer than that. At the recent M-Sport 'Return to Rally' event, new electronic stage timing was being trialled with direct links from stage clocks to Results HQ which wasn't even in the same county!

Of course Marshals were in attendance, and apart from a few hiccups the system worked well.

Taking that a 'stage' further is the 'Virtual Marshal' system. This marshal-less scheme was used with great success in late September on the 'Highland 1000 Rally', a 1000 mile tour of Scotland organised by Bespoke Rallies for historic and classic cars.

Using an App on a smartphone, the location of the car is identified by GPS and actual time of day recorded. Co-drivers can take a note of this for their own time cards and roadbooks or just leave the whole thing to the organisers.

Although Bespoke have their own system, third party Apps are now appearing in the App Stores including one called 'Virtual Marshal'. There is a growing number of these rally orientated tools which can be downloaded.

However, they can't replace the friendly frozen or drookit welcome from the lone anoraked figure standing in the middle of nowhere with a hearty greeting or a curmudgeonly acknowledgement depending on his or her experience with argumentative co-drivers or abuse from puzzled locals.

The recent annual 'Mudmaster' event at the end of October organised by the British Army Motoring Association was a case in point. This two day (and some night work!) event comprised a series of navigational and driving tests spread over three separate 1:50,000 scale OS map areas.

All the pre-event signing-on, scrutineeering, checks and instructions were carried out on-line and even included some classes on basic navigation training for the newcomers. On the event itself, there was no shortage of Marshals who were needed to observe the Driving Tests and penalty markers.

Run under a Motorsport UK permit, the BAMA team operated within the Covid19 restriction rules at the time because this event was also classified as a training exercise for the military, so there was no need for crews to be family members. However, there was a 'civilian class' for those crews who were related. Nice one folks!

The sport is evolving and organisers are adapting. That means crews will need to learn new skills, but I for one will be sorry to see the Marshal go. Which raises another thought. If certain authorities think we can manage without Marshals completely, then who will oversee the Spectators to ensure their safety and the safety of crews?

But here's the thing. One can't help wondering if this is all just a ploy by our sporting governors to ensure that no Marshal dares drop his trousers ever again to 'moon' at a competitor. It would never happen - again. Would it?