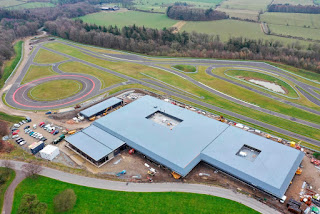 There was one story I wanted to include in Phil Walker's Obituary at the weekend, but before publishing serious stories I like to get them verified, despite what some folk think. Anyway, somebody's phone was switched off at the weekend, but he phoned first thing this morning!

It concerned Malcolm Wilson at M-Sport.

"I was having trouble at the time when I was trying to buy Dovenby," recalled Malcolm, "Chesterton was handling the sale on behalf of the local Health Board and the chap from Chesterton was making life very difficult. I just seemed to be getting nowhere fast. In a fit of exasperation one day when I was in the workshop, I asked 'does anyone here know anyone who works for Chesterton?', more out of frustration than hope, when John Steel said, 'Actually, Phil Walker works for Chesterton'."

"I had known Phil as a rally driver and customer so I phoned him and explained the trouble I was having with the Chesterton office in Cumbria. Phil asked a few questions about the property and asked what I was willing, or hoping ,to pay, then said. 'Leave it with me'."

"Within days he had sorted the whole thing out and 23 years ago we signed the deal on moving into Dovenby. Thanks to Phil."