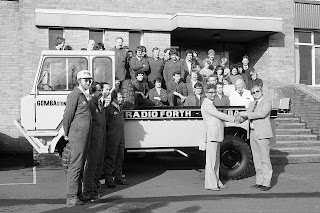 An interesting tale ... or maybe not, but it's amazing what you find when you're rummaging around looking for something else. And yes, there is an ever so slight rallying connection.

Way back in 1981 the Gomba Stonefield factory in Cumnock, Ayrshire, was planning to contest the 1982 Peking to Paris Rally with one of their 4x4 trucks. Co-sponsor for the planned attempt was the Edinburgh based independent commercial radio station, Radio Forth.

As part of their deal, one of the station's DJ's, one Chris John Esq, would form part of the four man team. However, 'Chris John' was actually none other than hillclimber and sprinter Chris McGuigan (the one with the beard!), so there would at least be some racing competition experience in the squad if not rallying! 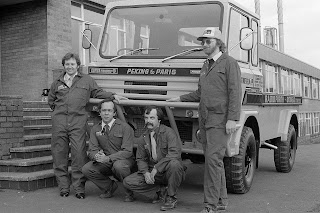 Anyway it didn't happen. Stonefield was just another casualty of Scotland's many failed attempts at the motor manufacturing industry and yet another example of Development Agency inexperience and Government interference. Sadly, factors which are still all too prevalent today - think ferries and airports!

Founded by Jim McKelvie, who incidentally was instrumental in launching Volvo commercial vehicles in Great Britain, Stonefield was building a range of 4x4 and 6x4 trucks for commercial and military use. With a payload of 1.5 to 3 tonnes depending on spec, the trucks were powered either by a 3 litre Ford V6 with Ford 3 speed auto or a 5.2 litre Chrysler V8 with Chrysler 3 speed auto and both utilising the Ferguson four wheel drive transmission.

The truck had a lot going for it. The forward control cab ensured a flat rear platform on which could be mounted a truck bed or personnel carrier. 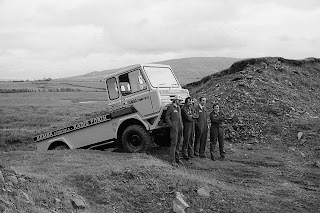 Sadly, the company went into receivership in 1980 when the Government pulled the plug on its involvement, so a buyer was sought. They chose wrong. The company was sold by the Scottish Development Agency in 1981 for £350,000 to Gomba Holdings Group on the assurance that production would stay in Scotland. It didn't.

The whole thing got even more messy after that. Abdul Shamji, the millionaire buyer was later jailed for 15 months at the Central Criminal Court in London for lying during a court inquiry regarding other financial matters. Apparently he claimed he had no Swiss bank accounts, but the court found he had at least six!

In one of the most damning statements ever made by a British judge, Judge Richardson told Shamji: ''When it came to those bank accounts you lied like a trooper.''

In other words, when it came to the Scottish deal, someone failed to apply the required 'due diligence', eh? 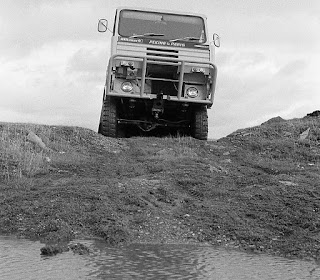