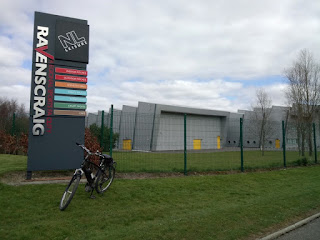 And now for something completely different - a tourism advert for one of the most scenic, and yet undiscovered, parts of Scotland. VisitScotland should be informed, read on.

Cycling around rally service areas in the search for gossip and scandal is one thing, but cycling on the public road is quite another. Even with reduced traffic, some of the eedjits in their motorised tin boxes still don't give cyclists enough room. Maybe some hi-viz lycra might help? Perish the thought.

Usually the bike is loaded into the back of the van between rallies for a trip to some of the forests and cycle paths nearby for a bit of post-rally R&R, but Nicola says that can't be done at present. And now that her Chief Medical Adviser (I notice they've taken her page down off the Government website!) has been found out to be flouting the rules, I better not try! 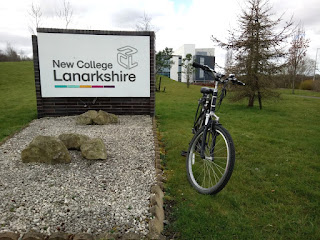 However, according to the local Tourist Board's advice there is a rather scenic cycling route through Ravenscraig, the wasteland that was once the site of the vast Motherwell steel works and foundry. At its peak, the 7,000 steelworkers toiled and sweated in this industrial cauldron to make 2 million tonnes of steel each year.

Under skies which no longer glow red at night there is now a Sports Centre, a pub and housing - so much for the politically promised Retail & Leisure Centre, industrial development hub and new railway station! Instead, new posters have sprouted up proclaiming the imminent arrival of the latest 'Visit North Lanarkshire' attraction - a public park! Some tourist destination, eh? Whatever next? Real grass?

A cycleway lines the new road built through the Park to the new magnificent seat of learning that is Motherwell College and which becomes the veritable burn-out and do'nut capital of Lanarkshire when darkness falls. 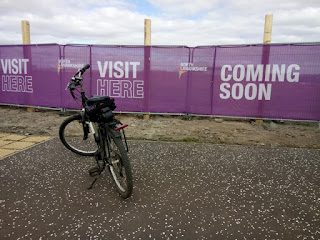 As for the Polis they are notable by their absence. Instead of speed camera practice on this stretch their interest lies elsewhere at present, like moving on the throngs of peelly waally sun worshippers in the nearby Strathclyde Park.

And yet, there was one overly eager young Polis. Apparently having spotted the grey hair poking through the holes in the cycle helmet, and despite the absence of wobbly cycling, he was concerned that an OAP on a bike was apparently flouting the law on exercise and not adhering to the strict letter of the law.

Having stopped this 'at risk vulnerable' person he asked: "Are you over 70?" The impudence of authority, eh?

Anyway, in a composed and civilised manner back came the undeservedly polite response: "Over 70? I haven't got over being 60, never mind 70!"

Your reporter will be back to normal tomorrow - if the saddle salve works! 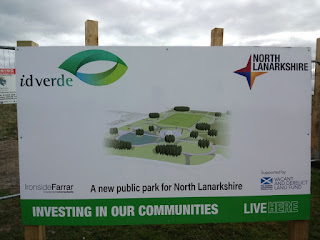 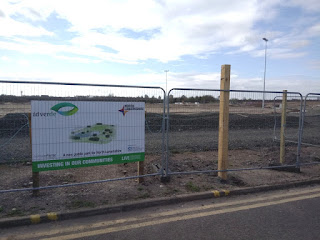