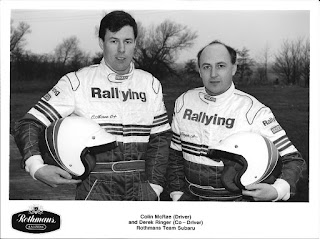 Thirty years ago, things were looking bleak in the young Colin McRae's onslaught on the sport of rallying. At the finish of the 1990 season he had nothing in prospect for 1991. His career could so easily have come off the road at that point - and then the phone rang. The outcome of which he scored his first major 'international' rally title, and won the 1991 British Rally Championship crown.

Prior to that, he was just another aspiring rally driver although many were already becoming aware of this rising precocious and prodigious talent, including some of the more far-sighted rally mags at that time. As such he became sought after as a columnist, first with 'Rally Sport' then with 'Rally Car'. The trouble was, pen paper and lacked the appeal of gearlever and steering wheel so he sought outside help to record his thoughts!

Hence the call to Castle Bunnet. That occasioned a regular monthly visit to the workshop at the top end of Lanark for a chat and discussion and numerous phone calls to and from faraway places. The rough draft of each column would then be submitted to the McRae household where the matriarch would cast her wary eye over the text removing the profanities and couthy comments, much against our will!

Of course his Mum, Margaret, was correct. He was fast becoming hot property and as befits someone who had to maintain a high public profile there was also a need to temper his more outspoken views and critical opinions and keep the big time sponsors happy.

Of course, the 'politically correct' Colin could only maintain that facade for so long and as he gained experience and confidence, the true single minded nature of the man did erupt at times and fans were able to appreciate his pithy humour.

He had finished runner-up in the 1990 British Championship and so prior to the Lombard RAC Rally that year a longer column was commissioned looking back on his season and looking ahead - if there was a future to look ahead to.

I have re-published that column (mostly in his own words!) in the on-line mag. It's quite a long one, so yet another excuse to get the kettle on and settle back for a read:
http://www.jaggybunnet.co.uk/2020/04/18-apr-1991-colin-mcraes-big-break/