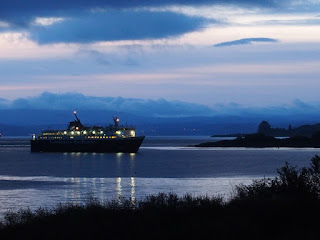 The news from Mull yesterday (see previous post) triggered memories of past battles, one in particular, Calum Duffy's first victory way back in 1998 in a 2 litre Mk2. My big pal Jaggy got quite emotional at the time and I have published the final 'MullMurmurs' bulletin in the on-line mag if you have a minute or two spare (?) to re-live times past.

There were 9 bulletins published during that event 22 years ago. The information was gathered throughout the event, typed up on to skins, and copies printed out on a duplicator in the back of a van. No internet and no social media, these bulletins were distributed by various physical methods.

Running ahead of the rally, Bill Sturrock in the '00' car handed copies out to Marshals for distribution at stage starts and finishes and threw them out the window when passing groups of spectators, hastily snatched up in a desire for news and results. If there weren't enough for everyone, one stalwart would read them out aloud, often by torch light in the dark, to friends and fellow fans around.

They were also left in the various hotel reception desks at Salen, Craignure, Dervaig and Tobermory and in cafes and shops around the island.  A bit hap hazard but the system worked, and it was welcome. They were also read out by Campbell Cameron live on air covering the rally from the Radio station Oban FM. Such innocent times, eh?

Anyway, the Bulletins were written on the run and told the story as it unfolded. It wasn't the most perfect of prose, but the big lad always seemed to get carried away a bit by the finish, so that final Bulletin is published again here, just as it was written in the final 'MullMurmurs' bulletin 22 years ago.
http://www.jaggybunnet.co.uk/2020/04/17-apr-the-1998-mull-rally/