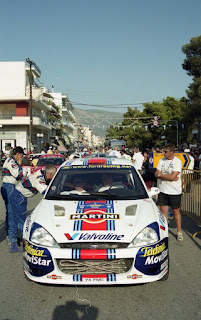 Jaggy Jailed in Greece? ... Writing up the previous Post called up another memory. Nearly 20 years
ago my Big Pal Jaggy was in Greece for the 2001 Acropolis Rally. However, things nearly didn't turn out as planned.

Having watched the rally, consumed the beer and eaten the souvlaki, the big lad and his British journalist colleagues went to the rally Finish to see the ceremony. They arrived just before the leading crews arrived in the fenced-off assembly area round the corner from the Finish ramp, whereupon the big lad spotted an Acropolis Rally Media Office and thought he'd chance his arm.

Easier said than done. Getting a WRC Media Pass even then, was like asking the Government for some PPE these days. Such a prestigious badge was only for those who followed all the rounds of the WRC subject to the approval and permission of the organisers, i.e. no louts or chancers allowed.

Anyway, feigning ignorance and flashing his collection of media credentials which included his local library card, Eddie Stobart Spotters club and Coltness Car Club membership cards, and Green Cross Code certificate and badge he assailed the media reps with a confident flourish. The rather forbidding lady in charge greeted this approach with a look that could freeze Castrol R at twenty paces. Such access was only for those accredited members of the WRC media. 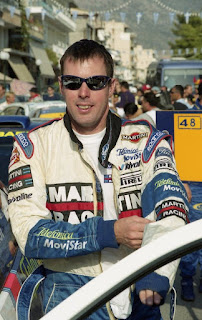 Nae luck, eh? Perhaps not. As chance would have it, having joined his colleagues at the enclosure barriers, the rally winning number 4 Ford Focus WRC drove round the corner and parked up close by. Out stepped a familiar lanky figure. Just the job. Our man Jaggy gracefully vaulted the barrier (in a surprisingly elegant and sprightly manner) and approached the driver much to the shock and embarrassment of his colleagues left behind and observing the rules.

Colin started to laugh.
"What are you laughing at?" asked our hero.
"Look behind you," said Colin.

Two Greek Polis were approaching from the rear while another two ahead were making  similar moves. Now I should point out at this juncture that the Hellenic Police Force are armed. Not with cattle prods and batons, but with guns. Real guns. This had gone un-noticed by Scottish rallying's media rep in Greece. 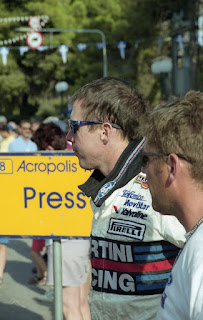 The two behind reached them first, both with hands on holstered gun butts, asking Colin in broken English if he knew who this interloper was. Naturally Colin shrugged his shoulders and shook his head which only increased the earnest intent of the local cops. But just as they came alongside, Colin started to laugh and put his arm around Jaggy's shoulders telling the Police in his best Greek accented Scottish that he was indeed a pal from Skotia.

Fully focussed on huckling the stalker away to a Greek jail, the Polis were initially puzzled and then mollified by this turn of events, and reluctantly ceased their threatening attitude towards this un-accredited intruder. Whereupon one of them produced a camera and asked his partner and Colin to pose with said vagabond between them.

Somewhere in Greece there is a fading photograph of one Jaggy Bunnet Esq being hoisted by his lapels by a policemen on one side and the 1995 World Rally Champion on the other. Whether this picture was used in the Greek version of the Police Gazette or reproduced on a poster to warn off rally spectators, we'll never know, eh?
Posted by John Fife at 09:51