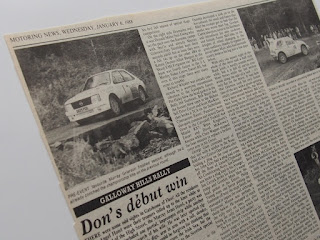 Way back in January 1988, 'Motoring News' relaxed their more usual formal 'house style' to allow a wee bit of 'end of term' atmosphere to be reported. Hence the unusual introduction to the report on the 1987 Galloway Hills Rally. It was also one of the few occasions that the word 'grush' was sneaked past the Sub-Editors.

However, house style prevailed when it came to reporting crew names, and their sponsors which tended to slow a good story at times, but even they convey a sort of period charm.

Anyway I thought it might be of interest in these incarcerated times and raise a smile followed by the full report of an eventful rally which took place 33 years ago.

The report mentions many names which may well be familiar to some of you now and many more which aren't with a few unusual cars in the mix too, like the 'Quastra'! So how many do you recall?

And some 10 years after his forest rallying debut, John Cleland was back in action in the forests.

A final point. It's a rather lengthy read, so settle down with a coffee and a biscuit and make yourself comfy. This 2000 word report was produced for MN on a BBC computer and printed on a dot matrix printer - ask your parents.