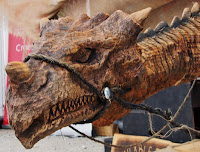 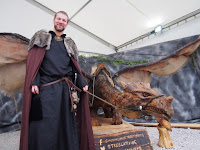 ere be dragons. In the depths of the dark, Welsh winter woodlands, lurk mystic creatures possessed of supernatural powers. They spit fire and flame. Their many eyes glow brightly and pierce the gloom. Their noise will shatter the stillness and their flight through the forests will amaze and delight the many thousands of onlookers huddled in the seasonal chill to witness the magical spectacle.

And it all gets underway tomorrow, Friday. A huge open expanse behind the Toyota plant in North Wales has been converted into a motor city with a variety of structures to house their charges, from the huge three storey Hyundai aluminium team garage to single canopies covering a single car.

In one corner of this expanse an outpost has been created. A haven for the far travelled. This is ‘Little Scotland’. With special dispensation from the rally organisers, the Scottish competitors have been grouped together like an advance guard from the ARR Craib Scottish Rally Championship. 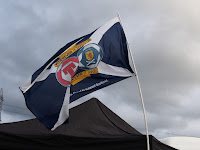 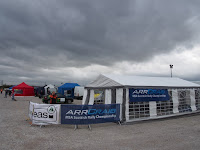 Twice Wales Rally GB National winner Mike Faulkner has pride of place at the southern end of the settlement and everyone else has pitched up behind. Geoff Goudie has just had his Subaru re-mapped by Colin Telfer and now has anti-lag for the first time, and he hasn’t driven it yet. Tom Coughtrie is equally apprehensive about the first stage: “It’s 20 miles long – I hope they’ve got a defibrillator for me at the end!” After a good season in his home series, Bruce McCombie is back for the first time in 4 years: “Unfinished business, we had a problem with the car that year.” And despite sharing the same tent, a grudge match is brewing between Lee Hastings and Iain Wilson. Lee finished fifth last year, but Iain was leading him by 0.1 of a second on Day 2 when a thoughtless tree halted progress in dramatic and abrupt fashion. Last year Lee ran immediately ahead of Iain, this year their running order has been reversed and Lee will be sniffing Iain’s exhaust.

There’s one gap though. Jock Armstrong is missing. He crashed the Subaru last weekend while testing and won’t be ready in time to make the trek south to Wales.

More teams are arriving and setting up camp, so if you’re coming down for a nosey, look out for the standard flying high above ‘Little Scotland’.

However, there is a hint of rebellion in the air and dis-satisfaction in the ranks. The local Greggs does not stock Scotch pies. You can have all the sausage rolls and steak bakes you like – but no pies!

Just one more thing, and speaking of Greggs, it’s ‘Top Scroots’ Rab and Sheila MacDonald’s 50th wedding anniversary today – and Rab promised Sheila a memorable meal in an exotic location. And there’s no macaroni pies either! That's Rab in deep trouble - again. Congratulations to you both anyway.
Posted by John Fife at 22:30