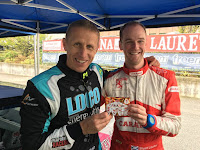 Stuart Loudon will be hoping for better luck this weekend on the Beatson's Mull Rally after two disappointments on the trot. Two weeks ago he crashed out of the WRC round in Corsica with Mohamed Al-Mutawaa in their DS 3 R3T on the fifth stage, and last weekend he retired on the second stage of Rallylegend in San Marino with Alister McRae when their Subaru Legacy expired!

This weekend he's off to Mull where the 2013 Mull winning partnership will be re-formed when he joins John MacCrone in a Ford Fiesta R5.

Reflecting on Rallylegend, Stuart said: “Rallylegend with Alister was the perfect way to get over the disappointment of not finishing Corsica with Mo. What an event! I have never seen anything like it in the world. It was absolutely fantastic.

“When we had retired, obviously Alister and I relaxed a bit and Luis Moya invited us into the Volkswagen hospitality unit. I was sat there with Alister, Luis and Markku Alen, then Marcus Gronholm walked in, followed by Timo Salonen and, of course, Hayden [Paddon]. Legends is about right! The whole event was amazing, I loved it and I would be back there in the blink of an eye.

Alister added: “I flew 9,000 kilometres to drive 14! Obviously it’s really frustrating to retire so early, but what an event! I would love to be back to give Rallylegend another go. I loved the atmosphere and driving something like a Mk2 Escort would be perfect – you’d really have the chance to entertain the crowds in that.”

This weekend it will be stars of a different kind, but no less spectacular. The skies over Mull (if it isn't raining) are stunning, just as the roads underfoot are amongst the most demanding in our sport. And it is on those roads that there will be more 'earthbound stars' in abundance too, just look at the entry list.

Amongst the front runners will be Tristan Pye in a freshly built Subaru Impreza. He finished runner-up to Calum Duffy in 2014, but like the 'Dervaig Dervish', he was out testing his new car last week.

Whereas Duffy was in Northern Ireland last month finishing 11th first time out on the Clare Stages and third on the Cork 20 National Rally last week, Pye was having a first run-out on the Cheviot Stages at Otterburn last Sunday.

Apart from the engine, the Subaru is new from the ground up, but it is still rather special. Tristan designed the suspension himself which has new hubs, uprights and track control arms plus unique Reiger shock absorbers built to his own specifications. He also sits six inches further back in the car which has required a bit of getting used to never mind the new suspension set-up.

Also conducting a bit of pre-Mull testing has been Daniel Harper. Winner in 2002 in a Mitsubishi Lancer he finished runner-up last year in his MINI Cooper S which has been in a continual state of development since BMW resurrected, revived and re-launched the British Leyland tin bin as a serious motor car 15 years ago. Last month he finished second overall on the Manx National, and who knows, had it not been for a "silly wee off" on the first stage, he might have won.

Like Tristan (John Pye Motors), Daniel has the benefit of a highly successful automotive engineering business (Minisport) on which to rely and where their cars are engineered, built and prepped and which should provide some serious opposition to the Muileachs and their mounts this year.

And then of course there is Paul MacKinnon, the third of the pre-favourite locals, but not necessarily in that order! He has entered an S14 Subaru Impreza this year having won in 2011 in an Impreza WRC so although he lacks testing, he knows the car.

Want a prediction? Any one of the top 21 could win this event this year - and that's about as close as I would like to go. Forget November 5th, the fireworks will come 3 weeks early - on Mull.
Posted by John Fife at 15:29