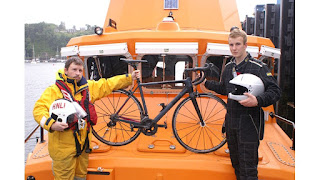 Ahead of next weekend's Beatson's Mull Rally, 18 year old Ally Currie is walking and cycling every mile of the 18 stages which comprise this year's event. An unusual way to make and check Pace Notes you might think, but he's actually doing it to raise money for the RNLI and has created a 'JustGiving' page so that donations can be made easily and donors and wellwishers can follow his progress.

What he has omitted to tell folks is that due to an injury he had to withdraw his entry from the rally, a bitter blow for the rally-daft teenager. Also, his left arm is in a sling, which puts the cycling part of his fund raising endeavour into perspective. Naturally, he is playing it down, but that's one way of giving something back, eh?

Ally works in the fishery business hence his choice of charity, so look up his page and lend your support.