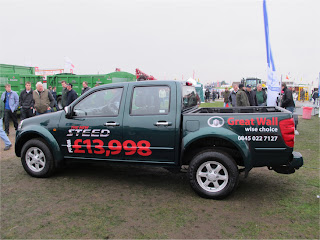 Last week it was the glamour of petrolhead heaven, the Autosports Show at the NEC, this week it was the wide open and windswept spaces of the LAMMA show at the old Newark airfield showground. This was the 31st running of the UK’s biggest agricultural machinery show and it was the biggest yet with well over 750 trade stands at the show, 160 more than last year.

But it’s not just tractors and combine harvesters, there were a few other items that would appeal to anyone with an interest in motoring.
For instance, how about having a Great Wall parked in your driveway? This pickup truck from China, which bears a passing resemblance  to an Isuzu Rodeo, is being imported by International Motors, who also happen to import the Isuzu Rodeo! Whatever, this new Steed from Great Wall is aimed at a different sector of the market, a sort of entry level 4x4 pickup if you will. Towing limit is a mere two tonnes with its two litre engine but payload is still 1050 kgs.
For 14 grand (plus VAT) you get a lot of kit with full leather, heated front seats, Bluetooth, aircon and alloys plus a six speed manual gearbox with Hi and Lo ratios, It runs in RWD with 'switch on the fly' 4WD.
It must be tough too, it sells well in South Africa and Australia as well as China. I also saw more new Ford Ranger pickups in one place than ever before. This latest version of the Ranger is available to order at present, but not yet generally available, although dealers are currently awaiting their first deliveries for their eager customers, including a friend of mine who emailed me just yesterday wondering if I knew when they were expected to land in the UK.
I made a couple of calls and found out that the first batch of the South African built machines is UK bound on a large ship after being delayed when the factory was flooded during some wild storms recently.
There were a few of the new Rangers, which are bigger than the outgoing model, on various stands around the show including this Wildtrak model in bronze, exactly the spec my mate has ordered – which made me wonder if this is his vehicle, on show in Englandshire, before being shipped up to him?
When he reads this he’ll go daft!
Posted by John Fife at 17:47