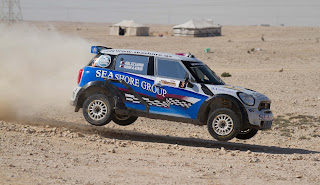 MINI scored its first international Rally victory at the weekend when Abdulaziz Al-Kuwari won the Qatar International Rally, the first round of the 2012 Middle East Rally Championship (MERC).
Driving a MINI John Cooper Works Super Production Car (SPC) rally car, Al Kuwari and his co-driving brother, Nasser Al-Kuwari, emerged victorious by a margin of 2m 24.9s and confirmed their first career MERC win and a debut success for the Prodrive-built and Tok Sport-run car.
The MINI SPC is the regional rally specification of the MINI World Rally Car. The cars are nearly identical except that the SPC runs with a smaller engine restrictor (30 mm versus 33 mm) and a smaller rear wing.


David Richards from Prodrive commented: “It is particularly fitting that the MINI’s first international win has come in Qatar, as this was also Prodrive’s first ever rally back in 1984 in the inaugural year of the FIA Middle East Rally Championship, when Saeed Al Hajri took victory in our Rothmans Porsche 911 SC RS.  Saeed went on to win the Middle East Rally Championship that year; let’s hope Abdulaziz can do the same.” 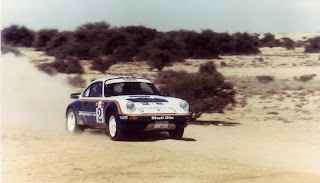 A few more successes like this and who knows, BMW might just think about sticking a few more Euros into the pot and get Kris Meeke back in the driving seat. Fingers crossed.
And besides it gives us the chance to look at a real rally car again - see pic opposite.
And here's another wee treat. Give your ears an aural massage with this wee promotional video of the Rothmans Dakar Porsche - but turn the sound up, as far as it will go. Magic, pure magic.
http://www.youtube.com/watch?v=0gxpcVYeZJM
Posted by John Fife at 17:25