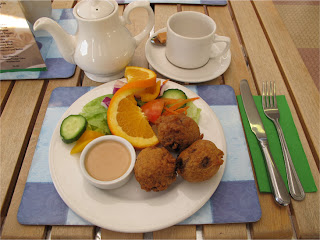 Well, that was a first. Haggis Pakora. With peppercorn sauce. Stopped off at Craigend Nursery for a spot of lunch, and this was the day's special. And this being the season of Rabbie Burns' nights, it seemed churlish not to to try it.

The verdict? The portion was too small. Four pakoras rather than three would have done the trick. Mind you had there been a bigger portion there wouldn't have been any room for the big dod of apple pie which followed. But back to the pakora, this was not to be confused with the battered lumps of deep fried sheeps' bits which can be bought in chippies, this was non greasy spicy haggis meatballs with a light crispy coating. Scrumptious. And with the peppercorm sauce, culinary heaven. It was so good, I just had to sit a wee while afterwards savouring the taste, before tackling the apple pie.
So where is this gastronimical garden of delight? Craigend is one of those garden centres with tea-rooms attached and it's just outside Mollinsburn, a quaint southern central Highland village on the outskirts of Cumbernauld. The trouble is, the opening of the new stretch of the nearby M80 makes it more accessible to passing trade. Maybe I shouldn't tell anyone about it.
Posted by John Fife at 21:31