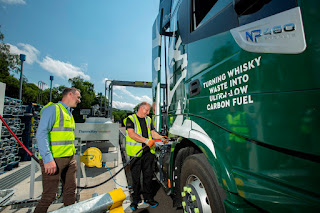 Now I know it's not quite 'motoring' as we know it, and it most certainly has nothing to do with rallying, but I think this news will be of interest to whisky lovers who may have concerns about future supplies of their favourite tipple.

Anyway, it appears that the 133-year-old independent family-owned Scotch whisky distilling firm of  William Grant & Sons has taken a leaf out of Compton Mackenzie's 1947 novel 'Whisky Galore' or maybe they were bored one night and watched the 1949 black and white film of the book.

The story concerns the plight of the freighter SS Cabinet Minister which runs aground on the Island of Todday and begins to sink. Apparently the cargo is 50,000 cases of whisky and when the islanders hear of this they set about rescuing the precious cargo. The whisky is then stashed in caves but when the Revenue men become suspicious they start a search at which point the islanders load up the lorry to remove the priceless commodity.

Of course, the lorry runs out of petrol at which point one of the 'rescuers' has the bright idea of pouring a few bottles into the fuel tank. Immediately the lorry fires up and sets off like a rocket out-running the pursuit.

It maybe not be quite as simple but that's what Glenfiddich are up to although you'll be relieved to know that no actual whisky is used or 'wasted' in this process.

Working with truck manufacturer IVECO, the two companies are pioneering the production of biomethane from the distilling operations, a first for the drinks industry. To that end Glenfiddich has taken delivery of three Compressed Natural Gas-powered IVECO Stralis NP 460 trucks.

William Grant & Sons’ engineers have created a new way to use its distilling process by-products. By loading waste matter from the distillery into an anaerobic digester, the company can capture the biogas given off as it breaks down. This is subsequently cleaned and used as green, low-carbon, low-particulate fuel for its new gas delivery trucks.

And there's more. Left-over solids can then be used to fertilise the barley fields and enrich the soils through carbon sequestration, pulling CO2 away from the earth’s atmosphere and thus creating a circular economy. This aligns the initiative with William Grant & Sons’ core values: ‘Be sustainable. Be responsible and think long term’. 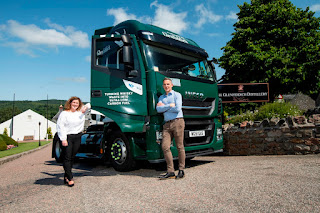 “It has taken more than a decade for Glenfiddich to become the first distillery to process 100% of its waste residues on its own site, then to be the first to process those residues into biogas fuels to power its trucks, and finally to be the first to install a biogas truck fuelling station supplied by our on-site renewable energy facility, " explained William Grant & Sons’ Dufftown Site Leader, Kirsty Dagnan.

If the process helps bring great scotch along the way, then that is even better!”

I'll drink to that!