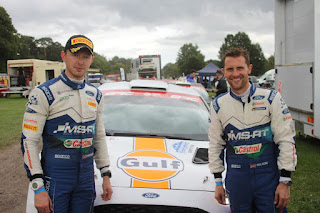 That's the main rally report from the Grampian Forest Rally now published in the on-line mag. Matthew Wilson and Elliott Edmondson won the rally from Osian Pryce and Noel O'Sullivan, and Rhys Yates and James Morgan, but there were no Scots on the podium this time.

Five of our lot finished in the top ten on last month's RSAC  Scottish Rally, but only two made it on this time. Garry Pearson and Niall Burns were 6th with Jock Armstrong and Cameron Fair 8th. Title contender Freddie Milne is still in the hunt, but for the full story see below:

Dust was a feature, but not a problem this time. Mind you, the midges made a late season appearance, no doubt stocking up on Marshal's blood ahead of Winter (just round the corner!) and they were accompanied by their pals, the clegs! Rallying in Scotland holds terrors in the forest like no other, eh?

There's more to come with more detail and more Info in the Classes Roundup - work is underway.