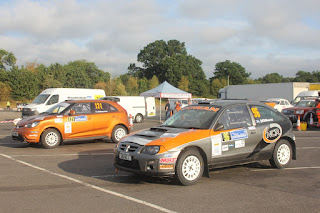 Just a thought ... Over the years we have had some pretty good one-make budget rally competitions and championships with possibly the original Peugeot 205 Challenge being the best of them. At the time there was a plentiful supply of bent and broken cars and 'shells cos of the eedjits flee'in off the road through hedges and fences with scrap yards, sorry, vehicle recycling centres providing a veritable haven for weekend 'gold' seekers.

Of course the supply started to dry up and folks looked for replacements with the Peugeot 206, Fiesta, Nova/Corsa, MG, Micra, Daihatsu, and of course the various Mini formulae, offering a replacement competition base, but none had the staying power of the 205.

With rallying becoming ever more costly, not just for cars, but all the greasy bits and black round rubber bits, perhaps a new budget series could be found and Niall Cowan Snr might just have a worthwhile idea. 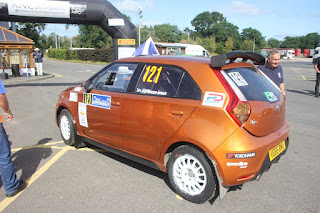 He appeared at the RSAC Scottish with his latest creation a 'new' shape MG3, but the cunning chap had fitted MG ZR running gear. Now since the engine is based on the Rover K series there seems to be a lot of them still about so it could form the basis of a 'budget' rally car with either the 1400 or 1600 engine as the basis.

Apparently roadworthy donor MG3s can be picked up for 2 grand (or less) and Niall reckons a car could be built for no more than 7 or less depending on sources.

The new car has a slightly longer wheelbase and sits slightly taller than his previous MG ZR but Niall reckons it feels quite stable and is just as much fun. And not meaning to be cheeky, if Niall can build one, then it should be within the capabilities of anyone who can tell a socket from a ring spanner.

Anyway, just a thought, and a wee bit cheaper than an R2! Worth considering, anyone? 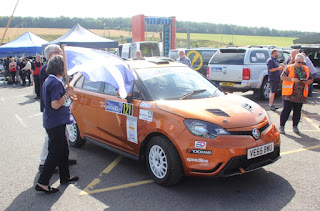