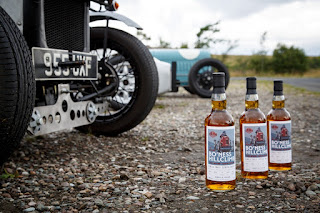 Confused? If you keep an eye on the Scottish Association of Motor Sport Clubs website and particularly the Calendar of Events section you may have noticed that this year's Bo'ness Revival Hillclimb meeting scheduled for the 4th and 5th of September (this coming weekend!) has been cancelled.

Although the 'Bo'ness venue has been cancelled, due to Covid reasons, it has been replaced with a new venue at Forrestburn near Shotts. So this year's Bo'ness Revival will go ahead as planned this Saturday and Sunday but not at Bo'ness. Got it?

Perhaps someone forgot to tell Raymond the Calendar-Keeper about the change, but anyway with little in the way of rallies this weekend, those of you who need a motor sporting 'fix' could do worse than take a gander at this unique event at its new 'one-off' location. Spectating is much better at Forrestburn than Bo'ness simply because you can see virtually all of the track from the top of the (exposed!) hill, but this being high Summer in Scotland the frostbite should be less severe than when 'Le Jog' passes through in the Winter.

Car parking is limited at Forrestburn (turn immediate left when you come through the gate) so don't be  too disappointed if it gets awfy busy.

As well as Covid, another reason for the re-location is just to keep the wheels turning for this enthusiastic bunch of classic car and race car enthusiasts and also to introduce a new three year sponsorship deal. The event is being sponsored by Cask 88 which is an independent bottler of Scottish whisky and cask ownership dealer for those who fancy the idea of buying bulk whisky in the wood rather than in the glass. 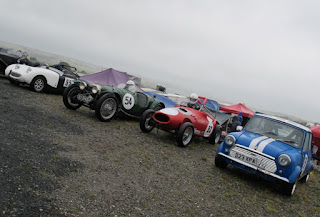 In fact Cask 88 has produced a rather special single malt called 'The Bo’ness Hillclimb “The Moose” Austin Special'. Quite a mouthful for a label but this 14 Year Old Loch Lomond Croftengea was laid down in an oak cask the year that the Bo'ness Revival Hillclimb was founded. And as for the 'The Moose' part, that of course doesn't refer to anything big, hairy and Canadian with horns, but more of the wee sleekit cowering timorous beastie type cratur and was the nickname given to a highly successful Austin 7 racing special way back in the day.

The entry list of some 60 cars or so features a fairly eclectic gathering of machinery from Austin 7s to Ford Anglias, Stutz and Alvis, Mini Marcos and E Types, and even a few 'historic' single seaters.

Sadly no whisky tasters will be offered, even if it is cold enough to freeze the bollards off a traffic island.