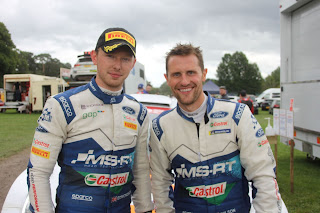 Osian Pryce snatched second place when Matt Edwards suffered a misfire caused either by fuel or electrical problems. He thought it had been fixed at second service but the problem resurfaced in the next stage. Rhys Yates fought back to claim 3rd place after his earlier pop-off turbo valve problem on the first stage.

Garry Pearson and Niall Burns set stunning times over the final two stages to claim top Scottish Championship points from Jock Armstrong and Cameron Fair. Armstrong had suffered front end damage in SS3 blaming unfamiliarity with LHD cars! Sterling work by the Buckley crew used up a whole bundle of cable ties and new parts to restore the Fiesta’s looks but there had been a little more damage than first suspected and he dropped back behind Pearson.

Freddie Milne and Jamie Edwards also set some blistering times in their fightback to claim 3rd SRC points after a troubled SS1 when the Fiesta was off the road no less than 3 times. Freddie said that was down to trying too hard too soon. However, complete brake loss courtesy of a fluid leak cost them more time in SS4 but still managed to finish 13th o/a.

Michael Binnie and Claire Mole split the R5 and World Car ranks with 16th place on the Lancer Evo9 and Mark McCulloch and Michael Hendry finished top 2WD in the Escort Mk2 with 25th place o/a.

Donnie MacDonald retired at the end of the first stage when a circlip came off the clutch inside the gearbox! Keith Morris got stuck in a ditch explaining “the speed was good – but the corner was too tight!” Willie Paterson broke a driveshaft on the start line of the first stage and he was gone while young Finlay Retson managed a stubborn finish after a gritty drive. He was off on the first stage, the ECU overheated on SS2 and the Fiesta went into road mode and had a puncture in Fetteresso.