The Force & The Raptor

May the Force be with you ... and cometh the moment, cometh the Raptor. For those fortunate enough to be able to attend the weekend's Iain Pinkerton Memorial Sprint at Kames, it provided a physical and sensory experience. It also provided a very sociable - albeit socially distanced - experience where folk who hadn't seen each other for months could have a blether and a catch-up.

It also provided hope for the future that things could get back to normal one day, provided everyone is careful, respectful and personally responsible. And so it looked at the weekend, both the EACC stalwarts and SSCC organising team had gone to great lengths to put the event on the track. Paddocks and areas were taped off, one way system for the loos instigated and hand sanitiser stations set up all around the public areas.

All paperwork had been completed on line. Some folk struggled but managed whilst others thought it was easy. All depends on your state of computer competency I suppose but one chap only had a smartphone and although he coped with his entry and details, he did struggle to read the small print! A right footery palaver by all accounts.

Declarations had been submitted and although there was a Scroot on duty there were no physical checks of every car, just spot checks, as and when he saw fit. One competitor did voice the opinion that he would rather have pre event checks as his car is self prepared and he appreciates the eye of another experienced person cast over his work - just to be sure!

There was however, one drawback to this return after the long lay-off. It wasn't just the cars which had been gathering dust. The drivers were out of practice. Put it this way, Ian Gemmell in the recovery Land Rover was the busiest man on the day on Saturday with 18 call-outs, although he only had two on the Sunday! 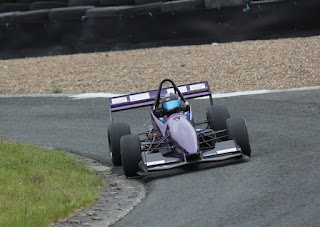 Surprisingly the track wasn't green, there was plenty of grip. Perhaps that's what took folk by surprise. Saturday's runs were conducted clockwise and Sunday anti-clockwise. Saturday was tee-shirt weather, but dull at times, whilst Sunday was hot and sunny and the action on track both days was fierce and frenetic.

George Coghill Jnr in his Force PT set FTD on his final run of the day on Saturday, but by goad it wis close, awfy close. He was holding 2nd place behind Les Mutch as he approached the start of his final run. A storming drive over the 2.4 km layout did the business, but only just. He scored FTD by one hundredth of a second. 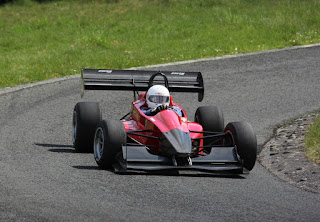 Sunday's final was equally gripping. Les Mutch had been lying third in class till the final competition run on Sunday to set FTD in the GWR Raptor. It was a sight to see with the sun glinting on the scarlet paintwork and chrome highlights as the Raptor rocketed around the 2.2 km track beating  Stuart Sugden sharing the same car by two tenths of a second. Magic, pure magic.

There was just one thing missing the whole weekend - the cafe was still closed. So no low calorie traybakes and no vegetarian pies! 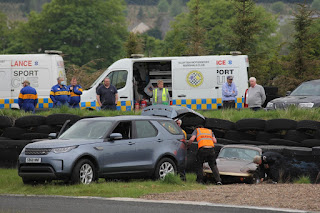