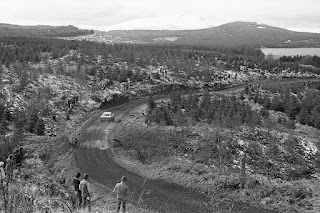 A few people were wondering why things had gone ominously quiet over recent days. The reason is simple, after years of collating material I have actually started to write up the history of the Scottish Rally Championship with the intention of publishing a book.

Already the plan has been changed, and then changed again. What started as one book quickly developed into three as work commenced. This second plan was a three book series with the first book covering the period from 1957 when the championship started to 1979, then book 2 would cover the twenty years 1980-1999 and the third book would bring things up to date from the year 2000 to 2019.

The trouble is I still have many gaps in the material collected so far from the late 50s and 60s as well as quite a few gaps in the 70s. So if you have any material from these days please don't chuck it out!

That's why work has started on writing Book 2 first. However, another major snag has triggered another major re-think. After letting a few close friends see some initial drafts the project has now turned into a FIVE book series!

Instead of two books covering the period 1980 to 2019, the plan now is to write four books, each covering a ten year span. That's simply because of the encouraging feedback from those early drafts as the readers wanted more information and more names. 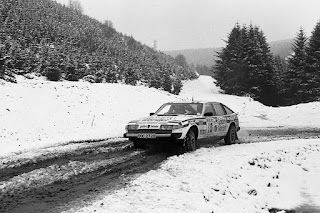 So, the 1980-1989 book is now under way with the material already written having to be re-written and expanded.

These books will be more of a historical work of record than thrilling page turner although I suspect many folk will indeed start on page one and work their way through, whereas others might just look for their own names or mentions of folk they know. That's not to say that the narrative will simply be a boring recount of facts and figures, it couldn't be with the sheer excitement and the colourful figures that the sport has produced over the years.

The intention is to have one chapter in each book covering one championship season, and will feature short reports on each championship round plus top ten results and end of season top 20 championship points tables.

It's perhaps sad to note that there is no central record of the sport of special stage rallying anywhere in Scotland and this attempt is to ensure that the sport's history will be permanently recorded. And when the youngsters of  the future turn to their grandparents and ask: What did you do? At least there will be a historical resource to which they can be referred.

Part of the plan is to donate books to the Scottish Transport Museum, the Mitchell Library in Glasgow and the National Library in Edinburgh plus the reference libraries at Beaulieu and the British Motor Museum in Warwick.

Naturally the books will be on sale to you lot out there too, but don't expect the price at this stage to be any less 20 quid a book, more like nearer 30, depending on page numbers and quality, as the aim is for a glossy page, hardback, A4 format, quality publication.

But you know what? The way things are going, there could well be another book, containing many of the tall tales, fabulous fibs, funny anecdotes, lesser known stories and trivial facts that won't make the current work.

So please don't throw anything out. At some point soon I will be able to compile a list of what's missing, publish that, and anyone who can fill a gap can request a visit from the author (me!) or bring it to an event, and I will photograph that material and then convert it to pdfs when I get home so there will be no need to take away your personal records. So look out for more info on that soon as progress is made here back at 'history central'.