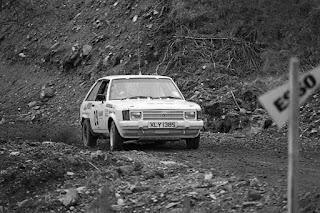 Whilst football and the Olympics generate headlines, rallying falls some way short. Perhaps that's because special stage rallying is one of the 'younger' sports. Although the sport has been around since the invention of the motor car, it was originally only for the rich and didn't really generate much wider public participation until the 1950s. Rallying then was about navigation, time schedules and driving tests and there was little needed in the way of car preparation other than ensuring reliability.

Come the 1960s and the sport started to move on to private roads. The big appeal was no Road Traffic Act compliance restrictions and no speed limits. Hence the attraction of the Forestry Commission's gravel roads. However, the use of such roads required more material changes to the car to withstand the rigours of the speed and pounding, but these were exciting, pioneering times.

It all got a bit more serious in the 1970s. As the sport progressed there was little appetite for protest and dispute, everyone just got on with enjoying it. It was also during this period that the World Rally Championship was created. Looking back, perhaps those were the best days?

However that popularity bred a more competitive strain of the sport with competitors wanting ever faster and stronger cars which all added to the expense of participation.

Come the 1980s and the increasing professionalism being shown by teams and competitors led to a rapid escalation of the technology and the money, and this of course filtered its way down through European, national and regional championships to clubman level.

The Scottish Rally Championship was no exception. Looking back on the 1980s there were indeed growing pains. Many of the youngsters today won't be experienced in the ways of rallying without Pace Notes or Route Notes, but 40 years ago there were serious problems. 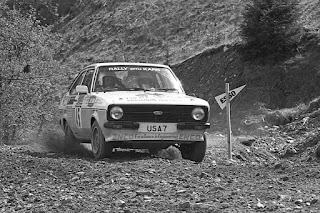 Navigators back then used Ordnance Survey maps to plot the route with some of the more dedicated Co-drivers trying to 'read' the roads from the map while Drivers followed the direction arrows which were placed ahead of, and at, each junction in a forest.

Experienced crews were therefore able to mark these regularly used rally routes with additional notes on the map or in a notebook. Naturally some folk thought this was cheating. There ensued great controversy and long debate about the use of such 'marked maps' and additional 'notes'.

When the sport tried to ban the use of 'pace notes' it resulted in darkly serious but sometimes comic attempts to catch the culprits. We may laugh now but organisers had to place Officials at Stage Starts  who would check to see if crews were using additional unauthorised materials and this included car searches and sometimes body searches!

Of course, the more determined a crew the more ingenious they became at hiding their notes to the extent that organisers then had to place Officials near the end of stage finishes as navigators screwed up their secret notes and tossed them out of the window. If spotted by an Official these were retrieved and the car's number noted. Crazy when you think about it now.

Eventually, with no adequate means of control the practice became an accepted and regulated procedure.

There was another great debate in the same era. Audi tossed a match into the petrol puddle of controversy with the arrival of four wheel drive and turbochargers. This caused howls of protest and generated great unrest amongst the ranks of clubmen, but progress is progress. Hard to believe now but at 'club' level many event organisers placed handicaps on these four wheel drive Group B, Bogey bashing monsters, ranging from 2 to 4 seconds per stage mile.

I was reminded of all this as I'm now almost half way through the 1980-1989 book. The trouble is, just when I think I've completed a chapter I come across another fact or story and have to go back for a re-write or edit.

The biggest problem now is determining the tone of the narrative. Originally this was supposed to be simply a work of reference and factual history, but there's more to the sport than that. That's why a growing number of personal and individual stories are creeping into the books. It has become more of an exercise in what to leave out than include.

It is said that Police officers and journalists never throw out their notebooks. Prior to lockdown and the sport's cessation I used anything from 20 to 30 spiral bound reporter's notebooks per year - multiply that by 40 and you have a glimpse inside my loft!