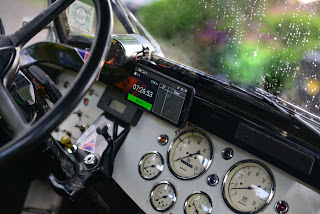 As we all sit at home in feverish anticipation of motor rallying getting underway, jump leads at the ready, we will have to get used to the idea that "things ain't going to be what they used to be".

Before you even hit the stages, there will be new Signing-On and Scrutineering procedures and once you get to the stages you might well find an absence or notable lack of orange hi-viz waistcoats. It is unclear as yet how the sport will move forward but we can expect radical changes in the method and management of timing competitors throughout a navigational or special stage rally.

That's not just down to Covid-19 but also to the arrival and adoption of new technology which should make it more accurate with less reliance on man/womanpower resources.

Lots of individuals, groups of organisers and clubs have been coming up with ideas for creating and /or adopting new remote timing systems, start/finish line procedures and field results systems and getting to grips with what new fangled technology is making available. And therein lies the biggest advance.

Mobile phones have created the biggest changes in rally organisation but were always limited by the quality of rural signal networks. Now we have Global Positioning  System tracking technology that utilises satellite technology and is being built into many phones - even watches - with the result that no-go areas in forests and rural landscapes are now able to be plotted accurately.

Apparently the cameras on some of these satellites can read a Tunnock's Caramel wafer wrapper grasped in the hand of a starving Marshal from an altitude of some 12,500 miles, or more importantly the Time Card thrust out of a co-driver's window. Of course, us minor earthlings won't get access to that level of technology, that's purely for military and political use, but we can get access to the positioning software that will determine a car's actual position to within centimetres of its location. And that's just the business for rally organisers. Combine that with accurate timing and a dream comes true.

One of the first such systems for rally use was developed by John Brigden of Bespoke Rallies. For over 20 years John and his team have been organising rallies around the world. He was the first to organise a rally through Cambodia, Laos and Vietnam, the first to rally through Bhutan, and the first to rally round Madagascar, Sri Lanka and the Amazon. Closer to home he has organised rallies through The Himalayas, South East Asia, Cuba, the PanAm rally across the USA, The White Nights rally around Scandinavia and the Grand Prix of South America.

So if you think a twelve-car in the wilds of Aberdeenshire or Ayrshire, or forest rally in Inverness or closed road rally in Duns is hard work just imagine what Bespoke has to cope with on their inter-continental adventures. Which might just be an idea for some of you lot out there to consider if you fancy the ultimate motoring challenge!

Latterly he has created a series of three day competitive events and developed his own 'Virtual Marshal' software to create a real time in car system to replace roadside marshals.

Anyway, he has very kindly and generously allowed me to publish in the on-line mag parts of an article which he has written for "Historic Racing & Technology" magazine and if any rally organiser wants to know more he can be contacted through Bespoke Rallies.

For more information, a website has been created dedicated to the 'Virtual Marshal' system:

John Brigden or any one of his team can be contacted through the Bespoke Rallies website:

The full article is well worth a read so if I find out when the specific HR&T issue comes out, I'll let you know.