The organisers of the 2020 Beatson's Mull Rally have stated that a final decision on whether this year's event will run or not will be taken by the team and the island on the 24th of July. By that time the picture will be clearer on lockdown/isolation rules.

Although it has been encouraging to note that such a relaxation is now underway, we daren't get ahead of ourselves. The folk who organise the rally have two major considerations, not just one. They not only need the goodwill and support of competitors, officials and spectators but they also need the permission of the islanders.

So far, the Isle of Mull is a Covid19 free zone so it is quite understandable that some folk are nervous about opening up their island to such an influx from all corners of the UK. For sure the island needs the income after a barren and difficult year but that has to be weighed against the risk to public health. A difficult decision looms - either way!

Anyway, I just thought it would be timely to reprint a Column which was written for Rally Sport Mag 30 years ago this year. This was written immediately after the running of the first Closed Road Rally on 'mainland' Britain. And yes, I know the Isle of Man is an island too, but IOM have their own 'Parliament' and laws whereas Mull is regulated by Westminster and also now Edinburgh. 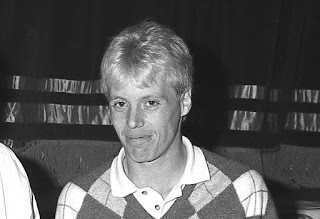 History records that this momentous event was won by Andy Knight and Mike Corner in a rather special 1600cc 'lightweight' Vauxhall Nova which had been loaned to them by Kendal based Atkinsons Motor Sport. Neil MacKinnon was leading till his Escort's engine failed with second placed Knight taking over and crossing the finish line some 6 minutes clear of Ron Beecroft in his 2.3 Escort. History was made.

Anyway, here's the Column and as usual no changes have been made to the text. It reflects what happened and what was said at the time so if you are too young to recall some of the names then lift the phone and call one of the auld gits or club members and ask for information. They'll appreciate the call given these strange times in which we currently live ...

The Column ...
It's not only footballers who cry. At the prizegiving following the 21st Gemini Tour of Mull Rally I distinctly saw tears. They were perched precariously on the edges of Brian Molyneux's red rimmed eyes as it slowly dawned on him that he and the rest of his cohorts in 2300 Club had achieved a minor motor sporting miracle - the first ever closed public road stage rally on the `mainland' of Britain.

The rally set another record too. At an hour and forty minutes it was one of the longest post-event prizegivings in motor sport. The only folk who minded were those who were unable to squeeze into the already jam-packed Aros Hall in Tobermory High Street. Brian Molyneux was first to speak and he publicly thanked all those who helped, from loyal club members to local councillors, from regional authorities to the Houses of Parliament and there were words of praise too for the RAC MSA, the RSAC and long time supporters Shell.

There was silence in the hall for that emotional speech as the crowd realised they had just taken part in a little bit of motor sporting history. Then it was Taff's turn. The Welsh accent embellished his words as he sang the praises of one man, and it was this that tingled the tear ducts. After Brian had heaped praise on all those who had helped to make the event possible, Taff put the record straight, but for the tenacity and vision of one man, the whole project would never have happened. Brian Molyneux was 95% responsible for this unique event. A fact confirmed by Argyll & Bute Member of Parliament Mrs Ray Michie who steered the necessary Bill through Parliament.

The tears still hadn't quite fallen but Eddie O'Donnell put the matter beyond doubt when he made a presentation to Brian on behalf of the people of Mull. Two specially commissioned framed photographs were presented, one showing Tobermory Bay and the other depicting what Brian has often described as the most glorious sight ever, Glengorm Castle at sunset. That was it, handkerchief time!

The rally itself differed only slightly from past selective events. The route followed the traditional pattern of Friday night and Saturday night sections with a Saturday afternoon daylight run through the forests. It was however, shorter than usual with only around 70 miles of stages on each overnight run compared with over a hundred miles of selectives. This was a sensible move in light of the necessity for a problem-free inaugural event and entries had been restricted to 100 cars for similar reasons.

There were a few hiccups regarding the different Marshalling, Timing and route marking requirements but this was to be expected on their first attempt at a `proper' special stage rally. There was however, no shortage of manpower, and one marvels at the dedication of the Marshals who flock to the island annually, at their own expense. After years of experience, safety and communications offer little problem although the `Raynet' amateur radio group have to set up four hill-top relay stations to cover the whole island. It might come as a surprise to those who have never been to Mull, but this 350 square mile lump of grass and rockery off the west coast of Scotland is far from flat!

The road closure procedure worked pretty well too. It had to really, with three different Police traffic authorities represented on the island, increasing the normal Police presence from 5 to 14 officers. Two cars ran ahead of the rally, the first carried visiting dignitaries but it was the second traffic car which officially closed the route. After the rally had passed, the organisers had an `opening' car with illuminated roof-top sign bringing up the rear. Most spectators were pretty responsible and respected the road closure orders, but there was one minor panic when a drunk driver crashed through a `road closed' sign on Friday night at Dervaig. The Police then howled off in pursuit and quickly caught up with him to find that he was a likely customer for the wee green balloon. I can however deny the rumour that the Police had to send over to the mainland on Saturday morning for more disc pads for their Rover SD1!

The island of Mull is perhaps the only place in Britain at the moment that could host a closed public road rally. If anyone thinks this motor sporting precedent is about to herald a whole new way of rallying, then forget it. The costs and the paperwork would defy many organisers. Equally important, there has to be, not just the public will, but the active support of the local inhabitants. And that is where Mull scores. In this strictly controlled environment the vast majority of the 2,000 inhabitants are all for it. And then there's the atmosphere. Can you imagine any other event in the world which holds pre-event Scrutineering INSIDE the local distillery?
Posted by John Fife at 12:05