Rally - Before the Internet

Although many younger rally competitors and fans enjoy looking back at films and photographs of rallies past, featuring such historic delights as Minis, Chevettes, Sunbeams, Corollas and Escorts, they don't know much about the working background of the sport before mobile phones and laptop computers.

Indeed, 40 and more years back, most rally fans headed for home after an enjoyable day's spectating not really knowing who actually won the rally they had been watching. That included many competitors on that self same event who also went home not knowing how well or how poorly they had done. They had to wait for the Final Results to pop through their letter box anything up to 7 days later.

That was because the recently introduced computerised results services were really only used on International events like the Lombard RAC and RSAC Scottish. In fact it wasn't until Martin Liddle (Tynemouth Computer Services), known in some circles as 'Sparky the Electronic Wizard' came up with a self built computer encased in a plywood box in the late 1970s that the sport entered a 'new' age.


Think about it, before computers, a Results Team had to calculate the individual stage times for entries of 100 cars, or more, contesting anything up to 10 or maybe 12 stages. Not just that, but Arrival Times and Passage Control times had to be checked and any Road Penalties calculated. No wonder fans and competitors left before Final Results were announced. 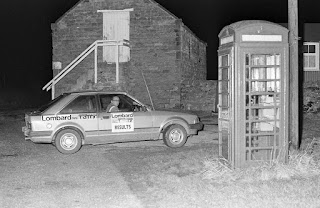 By the same token, the issue of field results and competitor information during an event became an industrial art form in its own right. Rally HQ would call up 'manned' telephone boxes and give the Marshals and Officials leaderboards and times ahead of the rally arriving at that point. The Marshals would chalk these up on blackboards for crews to note as they stopped to present their Time Cards.

It took an enterprising couple from Northern Ireland to come up with the best invention since thermos flasks. Some major events were already offering a field results system whereby times were printed off at remote locations on route and handed out to competitors, but what Brian and Liz Patterson did was take that a stage further with their 'RallyNews' bulletins.

Not only did they issue Provisional leaderboards, but Brian would add snippets of news and gossip. They also carried a small generator in the boot of their Volvo estate and a duplicator printer. This was a machine with an ink filled drum around which was wrapped a stencil. Using a manual ribbon-less typewriter balanced on her knees Liz 'cut' the stencils which were then taken to the duplicator in the boot, wrapped around the drum and hundreds of copies of their Results Bulletins were run-off within minutes.

Supplies were then given to volunteer Bulletin distribution crews whose job it was to distribute them free of charge to a wider audience.


It was a tremendous service. What made it so special was that Brian was often ahead of the official results teams. As he interviewed drivers for nuggets of information he asked the co-drivers what their times were and was able to compile a very provisional, but unofficial, top six or ten plus latest news. The 'RallyNews' service was soon in demand right across the British and Irish Isles. 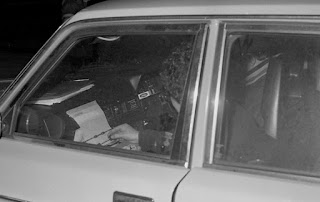 The photos show the team at work on the 1981 Lombard RAC Rally with Liz typing up Brian's dictation notes in the front seat before manning (womanning?) the duplicator printer. It's perhaps also worthy of note that it was considered dangerous to approach Liz while she was typing, such were the tight deadlines to which the team were working. The unknowing would be quickly repelled by one of Liz's favourite sayings: "Dae ye waant a moothfae o' dandruff?" which was uttered in a bold but confident attempt at a Scottish accent!

This temporary base of operations (in the photographs) was just outside the rather quaint Moorcock Inn at Langdale End in the huge Dalby Forest complex. The location was chosen simply because it had a red telephone box near the stage exit and close to the pub. It was indeed a very busy phone box that night. 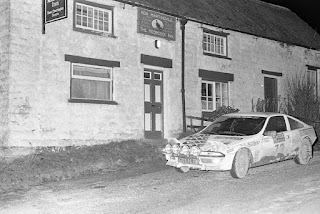 Regarding the Moorcock, I say 'quaint' but that's a polite term. Served up by the elderly proprietrix, Ada Martindale, there was more raw penicillin in the cheese sandwiches than in the medicinal stock room at Boots, either that or the 'furry blue' speckled bread had come out in sympathy with the blue cheese! The trouble was, one Information crew was so hungry that after a quick scrape of the stale bread with a blunt knife, the sandwiches were eaten.

This was indeed a much valued service back in the day, and one that was copied by a certain notorious character on the similar, but smaller scale, 'MullMurmurs' Bulletin service on the Isle of Mull for many years.

A longer version of this article is here:
http://www.jaggybunnet.co.uk/2020/06/21-jun-the-rally-bulletin-service/