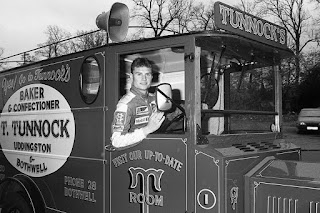 Once upon a time, long, long ago, a young lad left school with a driving ambition. He wanted to be a driver. Not just any driver, a van driver - Delivery Dave!

Despite his lack of scholarly qualifications, a good samaritan stepped forward to offer him a job. His name was King Carl McWafer and he had a factory in a far off realm called Tunnockshire. This manufacturing emporium was a magical place, producing some of the most succulent treats ever, enticing school weans across the nation to ignore their canteen dinners. 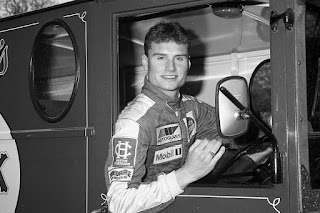 Such was the popularity of these caramel wafers and succulent 'T' Cakes (named after Tunnockshire) that there grew in the kingdom great mountains of uneaten porridge. Fortunately it didn't go to waste. Slices were cut from this growing bing, carved into blocks and transported to Auld Reekie where they were used to construct a  new people's palace at the foot of the Royal Mile. An edifice of such scale and magnificence that it was intended to surpass the grandeur and history of the neighbouring Palace of Holyroodhouse thereby conferring on its new incumbents a status far beyond their merit. A political statement was made.

But back to the tale. The fame of these scrumptious chocolate coated confections spread far and wide. Demand was so great that it placed huge responsibility on the shoulders of those charged with the safe delivery of supplies to tuck shops and health food stores and the banqueting tables of the great, the good and the ungodly across the nation.

A delivery driver of great skill, resolve and stamina was therefore needed to ensure the safe transport of this staple Scottish diet. 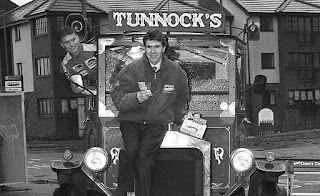 Sadly this earnest and ambitious young lad failed to meet the challenge. To this day his driving skills are questionable and his mechanical sympathy somewhat lacking to be entrusted with such a highly complex piece of automotive machinery as a delivery van. Neither was he any good at reading maps, requiring a navigator to travel with him. Unfortunately, the appointed navigator was no good at reading maps either and the duo frequently got lost much to the exasperation of hungry weans everywhere, from Balamory to John O'Groats and Bonkle to Port William.

Faced with such ineptitude, the good King had to let them go.

And so to the parable of this story. If you can't cut it as a cross country driver or navigator then seek another vocation which doesn't require such mental dexterity - like driving round in circles! The delivery world's loss was Formula 1's gain, and they all lived happily ever after.

( As I said, another true tale steeped in hard, solid, well-researched fact - or it might just be the result of lockdown fever! )