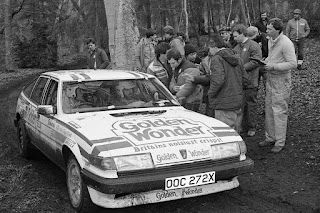 A couple of weeks back I posted some photos from Scotland's first ever Rally Clerk of the Course Training Day, well, here's some more. In 1984 the Scottish Rally Championship together with the Scottish Motorsport Marshals Club organised a Marshal's Training Day at Blair Castle in Perthshire.

This was more than just a training seminar. It was an actual hands-on practical session where a proper forest stage was set up in the woods behind the castle with an Arrival Control, Stage Start, Flying Finish, Stop and Passage Control - and speeding rally cars.

All the marshals and would-be marshals were guided and shown through the process of setting up a stage, including the need for accurate siting of arrows and stage signage as well as using timing clocks and becoming familiar with the rally crew paperwork. 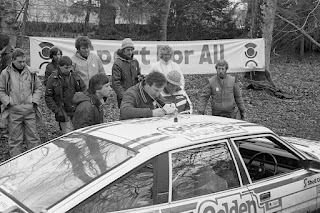 The event was also well supported by a number of drivers who had brought their rally cars and co-drivers to add a dash of realism and some young marshals actually got a run through the stage. That impressed upon them in graphic terms the need for accuracy when siting arrows and stage signage and ensuring that all signs were visible from a distance.

They even got fed, thanks to a donation from Golden Wonder with a supply of Pot Noodle/Rice and crisps. Some financial support also came from the government's 'Sport for All' campaign at the time.

This event was another first for Scottish rallying and when the Motor Sports Association posed the question: "Why are you doing this?"
Back came the response: "Because YOU are not!" 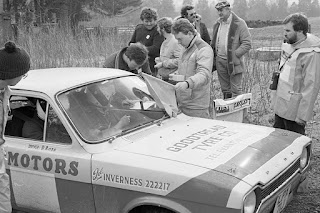 Back then the MSA seemed to regard themselves as purely the law makers and regulators. Little thought was given to the publicity and promotion of amateur sport whilst training appeared to be left primarily to those race circuit based marshalling organisations and the growing 'professionalism' of rally clubs.

It was a time when the amateur clubs were taking the lead and taking responsibility because leadership from above was distinctly lacking. It seemed that the emphasis there was all to do with control and governance.

Hopefully with a new structure and new leadership in place at the revamped Motorsport UK, things can and will progress in a more positive and democratic manner. I said hopefully. 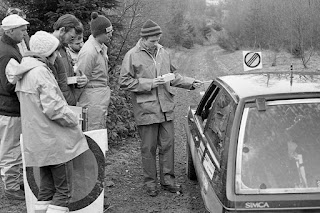 Anyway back to our training day. It proved to be a most worthwhile exercise. The 'classroom' session was held in the Castle's restaurant where the main group photograph was taken. Amongst this eager and youthfully enthusiastic brigade you might just spot one bright eyed young teenager in the middle of the front row who went on to become a World Champion.

Perhaps the most worrying thing is just how many of those hopeful, optimistic young things are still doing today what they did back then, only slower, with more creaks and groans, aches and pains, and topped off with grey beards and even greyer hair.

How many can you spot? 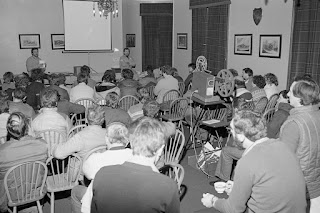 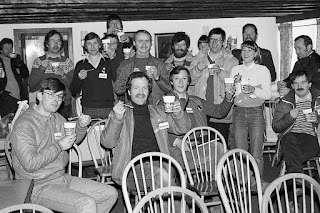 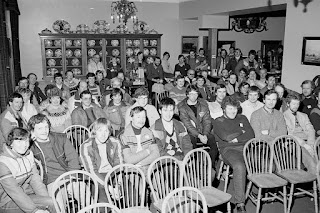 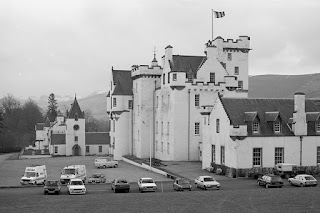