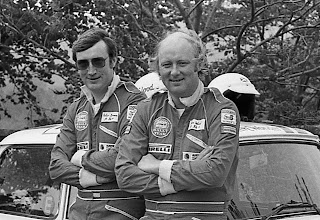 Just like the word 'awesome', the word 'hero' is over-used these days, to the point of almost meaningless mediocrity. For sure there are many folk young and old who perform exemplary acts or feats but to be a real hero surely requires much more audacity and bravery and possibly into the realms of superhuman effort and endurance. Surely it's all about going above and beyond what is regarded as normal.

Of course, there are indeed people who transcend the ordinary, whether you regard them as heroes is up to you, but there are four characters who have helped to shape my view of rallying. The first was Timo Makinen whose exploits in Minis, Austin Healeys and Escorts were full of unbelievable truths and tall tales. Closer to home, my second was the late Drew Gallacher, big man, big heart, huge talent. Of equal stature for many of the same, and indeed some different reasons was, and is, Ken Wood, engineering genius and gifted pilot - both on the ground and in the air. And then of course, there was Colin.

Anyway, the reason I mention  Gallacher and Wood is that they were an integral part of the fight for the 1980 Scottish Rally Championship title. This was the year that Gallacher scored his hat-trick of three in a row national titles bringing his tally then to a record breaking four Scottish titles (his first was in 1973) but if that statistic makes his fourth title sound pretty easy, it wasn't.

I have republished an article in the on-line mag which was written by my Big Pal Jaggy in a 1980 Scottish Championship newsletter and as you can guess, the big chap let his tongue run away from his brain.

The article was written immediately after the Esso Border Counties Rally which was both a counter in the BTRDA Championship at that time and Division 2 of the Scottish Championship. In other words, all the top crews from down south had assembled in the Tweed Valley to do battle with the Scots. The fun was fast and furious and the 'craic' was both colourful and plentiful.

This was one of the first events which elevated Wood into Makinen and Gallacher status as far as the author was concerned. However, a word of caution for those of faint heart and a weak constitution - there is some mild 'racism' portrayed in this report. What we used to call 'banter' back then, but reflective of the times, and so the report has been left as it was - the English readers can direct their wrath towards Jaggy, not me.

Anyway, the report has been republished as it was and I'll leave you to work out the nicknames and try and recognise/remember the others, cos that's half the fun, is it not?