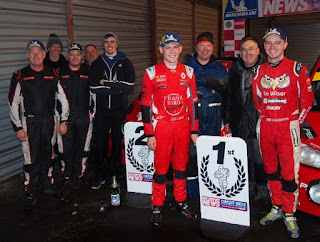 Frank Bird almost dominated today’s Knockhill Stages Rally – almost, but not quite. A perfect score of fastest stage times was spoiled by one ragged finish at the end of the 4th test. He stalled the car on the start line of the stage and although it only cost him a few seconds, it meant he got caught behind the top seed who was starting his second lap as Frank was belatedly setting out on his first. Of course he tried to make up time, but it got a bit scrappy in places due to the wet and puddled conditions. A committed attack on the final stretch of the stage resulted in all four wheels of the Focus WRC ending up on the grass – but only after he had crossed the Flying Finish line.

He still dropped only 3 seconds to John Marshall, but his lead was secure. As for Marshall, he was struggling to get his Fiesta R5 to turn in. He tried Michelins in the morning and Pirellis in the afternoon: “When it did turn in, the back end just didn’t want to follow. Usually I can manage to dial that out but not today.” Frank was having trouble too: “The tyres are still stone cold at the end of each stage!”

And that was the story of the day – the weather. By goad it wis cauld, and it was wet. It rained so hard Noah would have caught a bout of boat building fever had he stopped by. That led to quite a bit of standing water around the circuit and streams running across the road.

And through it all, the fifty or so Marshals stood at their posts, sodden, dripping and no doubt chittering. And if these folks deserved medals, then the Set-Up crew on the day and the days before deserved knighthoods. They certainly deserved it more than some of those seat polishers who sit in the Big Hoose in Westminster and do feck all.

Richards Wells finished third in his Lancer ahead of Neil Roskell’s Subaru with fifth placed Kyle Adam the only other Scot besides Marshall in the top six. Kyle was running the 2.5 litre Millington in his Escort for the first time, and given the treacherous conditions, drove a sensible and canny run to finish top 2WD just ahead of the tying Darrian and Lotus Sunbeam of Barry Morris and Mike Taylor.
Barry Groundwater (9th) was the only other Scot in the top ten of this Motorsport News Circuit Rally Championship counter. He was driving Brian Watson’s Subaru whilst Brian himself was out in another but didn’t get beyond the first stage when the turbo blew. If you thought the weather was foul, you should have heard the Sheriff: “I’ve just had the car totally rebuilt and it was running fine - then this!” Naturally this rather succinct quotation has had to be edited from the full length version in case any weans read it!
Robert Marshall was 12th in his Subaru ahead of Ashleigh Morris, 13th in her Fiesta R200, while young Johnnie MacKay finished an excellent 15th in his Fiesta ST. Not so lucky was Freddie Milne who had a troubled outing in a hired Fiesta R5 which finally ended in the 5th test with the car parked just off track beyond a chicane.

(There will be a full report in the on-line mag in due course)
Posted by John Fife at 19:31