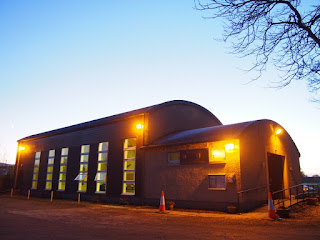 Scottish rallying and Scottish car clubs must be in a healthy state. The sport and its followers obviously don't think there is anything wrong at all. At the recent Club Development Day organised by Scottish Motor Sports, there was one car club, one marshal's organisation and five motor cycle clubs represented, so the rest of you must think you don't need any help.

The meeting started at 10am and finished just after 4pm with a couple of tea breaks and a lunch halt during the day and that was when much of the best business was done. Networking with the others. It's a hackneyed term these days, 'networking' but when standing around discussing the issues of the day it's remarkable just how similar the problems facing all of us are. It's also good to hear how other folks are tackling these things.

And that was perhaps the essence of the day's discussions and activities. Getting folk to communicate, share ideas and solutions, and work things out together. The emphasis of the various presentations were to do with attracting new members to clubs, retaining them and encouraging them to train for roles within the club and the sport. It wasn't about running a motor club and events, that's a whole other topic for another day.

In fact some of the activities in which we engaged had nothing to do with motor or motor cycle clubs. That was deliberate, as it made folk think harder and not just accept current practices and procedures

For the auld gits amongst us who are set in their ways, think they know best, and know the best way of doing things because it's worked in the past, and are not willing to try anything new then this event was not for them. For anyone willing to listen, join in and discuss, then there were nuggets to be had.  If you can't, and don't try to learn, then in this day and age you'll go backwards because the rest of the world is moving on. The choice is yours. Stick it in neutral and just coast along or pick a gear and make some progress.

Amongst the things I learned there was one that stood out above all the others. It's more applicable to stage rallies where Marshals and officials are scattered across vast swathes of countryside. They often go home from events, wet, miserable and lonely with little idea of how things went let alone a Thank You. Of  course I know many events try to be inclusive but here's the trick. Get all Marshals to sign up to an event-only  'WhatsApp' group. All it needs is someone in HQ to send out very brief messages during the day informing folk of delays, incidents, news, results and then a sincere thank you at close play. Make them feel wanted and part of team and make sure they feel valued when events come to a close. Simple idea, eh?

No doubt some of you are working on such ideas, and I have heard of a couple - but here's the thing, why keep it to yourselves? No doubt some other smarty pants will point out that mobile phone signals are unreliable in remote locations - but coverage is getting better. That's no reason not to try.

Will I be at the next one, who knows, they might not invite me back? There were so few people there that I felt I couldn't just sit and observe so I joined in. And I asked a few questions. And I voiced a few opinions. Gillian and Shabaz had put a lot of work into this and given the support, or lack of it, where is the incentive to try again?

Mind you this meeting did prove one thing, The rural location might have had something to do with the poor attendance. I drove past it and others did too. It just goes to show that the national postcode system still can't beat an 8 figure map reference. Then again, how many of today's co-drivers/navigators know what an 8 figure map reference is, eh? Back to school everyone.
Posted by John Fife at 15:52