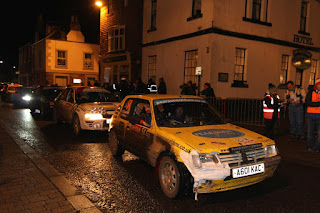 That's the roundup of the various capacity Class competitors on the Jim Clark Rally now in the on-line mag and also a digest of news and idle gossip.

Unfortunately the roundup is not as comprehensive as I would have liked nor was the gathering of blethers and fibs. That's entirely down to the fact that the service area was spread over six different and separate sites, each requiring a walk from one to the next and with rally cars coming and going and not necessarily in any order, it was difficult to get round as many of the crews as I would have liked.

A pity, there were tales to be had and therefore sadly missed, so you'll just have to make do with the meagre collection including the Malton Missile's memory lapse, Donnie MacDonald's nearly late arrival and the reason for Robbie Pearson's bleary-eyed approach to the rally.