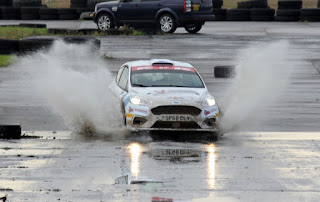 If Mull was wet, wet, then Crail was just wet. And where it wasn’t just wet, it was muddy, greasy and grassy wet. Trouble was, conditions kept changing throughout the day. The correct tyre choice at the start of a stage was often proved to be wildly wrong mid stage while a third choice was needed by the end of the stage! Even Harry Potter would have been confused.

Today’s Kingdom Stages was the final round of the 2019 Cobble Shop Scottish Tarmack Championship and what a finale it turned out to be, not just the duel for the title, but also for outright victory on the day.

Greg Inglis and Kyle Adam arrived at Crail knowing one would leave as champion, and the other wouldn’t, and there was only 1 second between them in Greg’s favour at the start. As things turned out they each scored maximum championship points by winning their respective capacity classes. Not only did they win their classes, Greg finished 3rd overall in the Exige while Kyle was 4th in the Escort. Greg is the new Scottish Champion.

Meanwhile up at the sharp end, Andrew Kirkaldy led from the front. After 2 stages he was 19 seconds up on Alistair Inglis and after 4 stages, they were dead level!

It all went wrong for the Lotus driver when it hit standing water, spun like a peerie, a full four 360 degree spins, ending up astride a pile of tyres with bent steering. No big damage but he was out. Harry Chalmers lost out on a sensational potential 3rd place overall when the bonnet pins snapped and the Subaru’s bonnet flew up obscuring the windscreen and 4th placed Alan Wallace then lost out on 3rd place when the Lancer’s centre diff broke.

That pitched the Subaru of a surprised Joe McKeand into the runner-up spot with the boys in 3rd and 4th. Chalmers recovered to finish 5th easing Greg Stark into 6th who was struggling with a leaking clutch master cylinder in the Lancer and losing pressure throughout each stage.

Kirkaldy took the win, and somewhat relieved considering the slippery, uncertain conditions: “I loved those last two stages, they were really fast, super quick,” said Andrew, “I’m just glad the Escort is in one piece – so my brother (Alan) can’t moan at me!”

Full results on: www.scotresults.co.uk
Just a short report for now (still bluidy drying out!) but there will be an event report with Pics in Wednesday’s ‘Motorsport News’ and a much fuller rally report in the on-line magazine later next week.
Posted by John Fife at 21:26