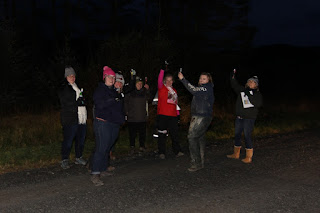 As night fell over the Scottish Borders Hill Rally in Galloway last Saturday, silence settled over the mid forest encampment as rally crews fitted additional lighting to their cars ahead of the three night stages. And yet from somewhere in the darkness there came the unmistakable sounds of shrieks and shrill laughter. These sounds were accompanied by weird pops and fizzing noises and the clink of glass. The remote nature of the area gave rise to wild flights of imagination, could it be a fairy circle or perhaps a witches coven?

The sounds drew nearer as the noise level rose. Into the floodlit service area appeared a group of young women led by one with a white headdress. The fears were realised, this was no fairy gathering or witches congress, this was the Scottish Hen Hill Rally. It said so on the tee-shirts. These were indeed brave and foolhardy girls. They were charging £1 a kiss. Very brave, considering the distinctly unappealing variety of menfolk! 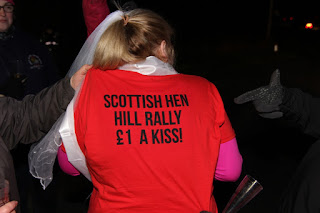 The girl in the headdress was one Kathy McCune, the wife to be of co-driver Wallace McKay who was navigating for George Bryson in the Kirkland Proto. As the car moved up to the start line archway ahead of the night section, the girls cheered and sent the Prosecco splashed car on its way.

Gaun yersels girls, you brought a little warmth to a cold night in Galloway.

As for Kathy and Wallace they are due to get married back home in Dungannon in January. All the best you two. 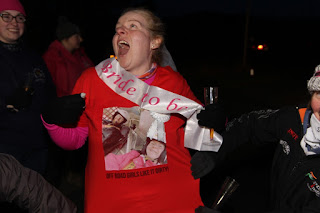 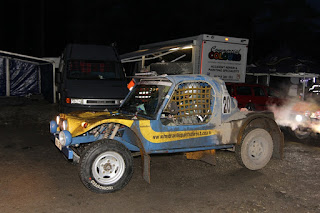 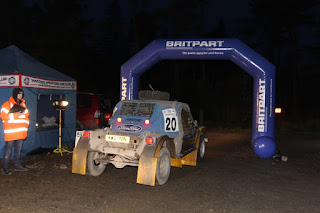