Rally - A Day Out 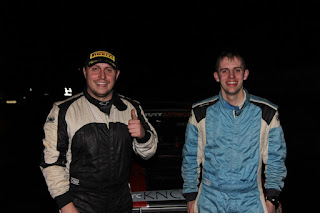 Mark McCulloch and Michael Hendry won the Roger Albert Clark Clubmans Rally yesterday. Note the use of the word 'Clubmans'. This event was run over 6 stages in southern Scotland. As such you won't hear much about this rally within a rally as it comprised only a small part of the much larger 5 day, 300 stage mile R.A.C. Rally itself, but for those unable to commit to a week long event, it entailed a simple 52 stage mile, one-day, run-out in the woods.

Northern Ireland's Bryan Jardine was 2nd and England's Phil Jobson was 3rd making it a truly 'international' affair in its own right. Donald Peacock had been holding a pretty impressive 4th place in the humble Peugeot 205 over the first 4 stages, but dropped 18 seconds in Twiglees in the dark to Ireland's Noel Lappin. Despite a heroic fightback across the road in Castle O'er where the Peug snatched back 7 seconds from the Mk2, Donald and Albert lost out on 4th place by one second. Close, eh?

Colin Smith was delighted with 10th. After the responsibility of being CofC for the Jim Clark Rally this was a chance to relax and enjoy the other side of the sport. Mind you, enjoyment and rallying don't always go hand in hand. Colin and Adrian had a front puncture in the Astra in Ae and had to stop and change it. Not only that, they towed a Welshman's stricken Sunbeam out of the woods back on to the road where the grateful crew could change a broken alternator and get back in the rally. Nice one boys.

Alan McMorran scored a very surprised 11th place finish. Surprised, because Albert claimed to have retired from rallying after last year's Galloway Hills! That's his second event since he 'retired'. Ian Forgan retired the Ford Ka in the first stage with clutch failure and Alistair Brearley failed to come out of Ae when the Escort had an intimate encounter with a ditch. 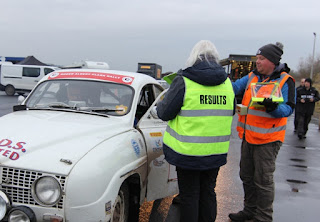 And another thing. Whilst standing there in the dark at the far side of the Lockerbie Lorry Park waiting for cars to finish, a figure in white loomed out of the darkness. It was Albert Connolly in his racing ovies and he wanted to query a stage time with the results crew. Fortunately it was the Chief of the Field Results Team who was on hand, Paul Crossley, and Paul patiently took note of his query and said he would look into it once he had all the paperwork to hand.

Naturally, being of an inquisitive nature and inquiring mind, my big pal Jaggy, who was holding the camera, innocently asked of Paul why in this day and age of digimation and electronickery why such a time couldn't be checked more quickly. One could see the whites of Paul's eyes glowing in the gloom as his eyeballs rolled upwards in exasperation at my pal's ignorance.

Patient as ever, Paul explained that although competitors record their own times as Time Cards are handed in at various Controls, the Marshals' check sheets provide a valuable back-up supporting document, but these are only returned to HQ when the stage is closed - and not necessarily promptly.

That still left my big pal with a puzzled expression on his face till Paul pointed out that over the course of this 5 day event some 6,000 individual Time Cards (from Passage, Stage Start and Stage Finish Controls) would pass through his hands and he would have to deal with some 17,000 individual times, not to mention countless queries!

That kind of puts things in perspective, eh? It also explains why Paul didn't get to his bed till half three in the morning on Saturday night and was up again at the crack of dawn on Sunday to continue his duties. So whilst we rightfully praise Marshals, Officials, Paramedics, radio, rescue and recovery crews we shouldn't forget the tireless efforts of the Results Teams personnel on every event. Without them there would be no competition either.