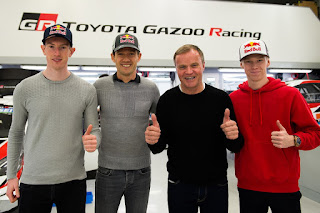 Tommi Mäkinen (Team Principal) said: “I’m really pleased with the driver line-up we have been able to put together for next season. We know how strong Sébastien is and we’re all looking forward to working with him and Julien. Elfyn is a driver I have been watching for some time. We’ve seen that he can have the speed to win on almost any surface, but he can also be very clever when needed and score good points. I’ve known Kalle since he was very young and it’s always been clear that he has something special. He still has lots to learn, but I believe that he is ready for this step now. I want to say thank you to Ott and Martin, Jari-Matti and Miikka, and Kris and Seb for all they have done for our team. I wish them all the best for the future.”

Elfyn Evans added: “Joining TOYOTA GAZOO Racing is a great opportunity for me and I’m really excited to get going. Tommi has been very successful as a driver himself and knows what it takes to perform at this level. It’s been great to deal with him so far, and I’m looking forward to getting to know the team better as we ramp up towards the start of next season. 2019 was a mixed season for us – missing three rallies due to injury being the low point – but there were some strong results and performances as we competed for stage wins and podiums. It will be nice to work with Sébastien again too: With the experience and success he’s had, he’s a great guy to have in the team.”

Team Chairman, TOYOTA GAZOO Racing World Rally Team, Akio Toyoda said some very nice things at the press conference which included a sincere thank you to past team members: "Jari-Matti, thank you for fighting with us for three years and Kris, you have worked hard for Toyota. Lastly, Ott, I am happy like myself that you finally achieved your dream, becoming World Rally Champion. Myself and Toyota are very proud of helping to achieve it.

Unlike Mr Tomoyama (President, GAZOO Racing Company), I have not been good at climbing the podium, but you taught me how to do it in Finland last year. Thanks to you, I could see the view from the top of the podium and get to know how sticky the champagne is. I really appreciated it. I think your decision, “After achieving the goal, I want a new challenge with different environment”, is simply amazing. You will become Toyota’s rival next year. For us, having a strong rival is big motivation to move forward. Because you have taught me how to stand on the top of the podium and how to open champagne bottles well, I can shower the champagne to you from higher position when we see each other the next time. See you again on the podium!"