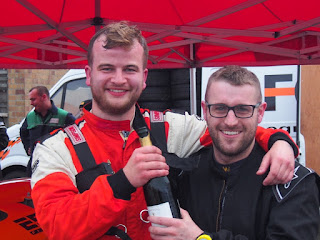 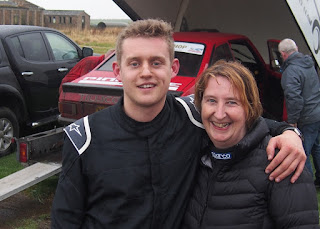 On the day, Greg was navigated by Ian Parker while Fiona was driven by the newly crowned 2019 Junior Champion, Kyle Adam. In fact, Greg and Ian had a relatively stress free day compared to Kyle whose runner-up points finish was down to the heroic efforts of Fiona.

At the end of the first stage, the Escort's alternator failed and the car cut out just as it approached the Finish line at the end of the very first stage of the day. The sudden-ness of the electrical cut-out pitched the Escort into a lurid spin where it lay dead in the road facing the wrong way. Out almost before they had started? Not quite.

In one of the jammiest stage finishes seen in a long time, the spinning Escort broke the stage finish timing beam - they got a time. However, with the car completely dead and refusing to fire up, Fiona had to get out and push watched helplessly by the Marshals and spectators who were not allowed to help as the car was still within the Time Control and not allowed to receive 'outside assistance'. The poor girl was knac.... almost exhausted, but she did it.

Aye gaun yersel girl! The finest advert for home made porridge if ever I saw one.
Posted by John Fife at 21:41