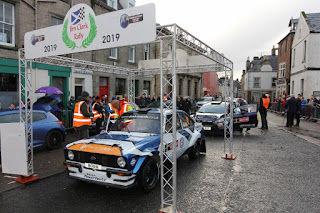 The 2019 Jim Clark Rally got underway from the town square in Duns this afternoon with just one special stage at Abbey St Bathans before the overnight halt. The planned two stages at Langton had to be called off earlier today after heavy rain led to water streaming off the fields and down the road while water levels at the notorious ford were too high.

Rain may have dampened conditions but it hasn’t dampened enthusiasm for the return of the rally with huge crowds watching the colourful cavalcade of 100 cars leaving the start and thronging the spectator area on the opening stage.

Even so, conditions on the stage are treacherously slippy so it was a surprise to see that the rear wheel drive Ford Escort Mk2 of David Bogie was the early rally leader. Five seconds behind him Josh Moffett and Dale Robertson share the runner up spot at this early stage in their Ford Fiesta R5 machines. Hugh Hunter is 4th in his Ford Focus RS ahead of Ross Hunter in a Fiesta R5 after a last minute deal was done otherwise he would have been out in his Peugeot 205. Gordon Morrison rounds off the top six in his new R5.

Dale Robertson might well have been a bit quicker but for a rear wheel puncture 2 miles from the end of the 8 mile stage and then admitted that he had been well off the road at one point when he hit standing water and the Fiesta shot into a field for 50 yards. John Indri suffered a right front puncture in his Mitsubishi Mirage while Andy Fenwick had a wee scare when he hit standing water just over a crest with the Fiesta which stepped out some 45 degrees and heading for the banking when he caught it.

Just outside the top ten Alan Kirkaldy reckoned he made a wrong tyre choice. With everyone else on full wets he opted for a Monte Carlo type tyre which is good in snow and ice and which he thought would be good to cut through the wet muddy surface. It wasn’t! First time in RWD Garry Pearson is also just outside the top ten in his Escort Mk2 but the grin said it all: “We had a good few moments in there,” he said, with his co-driver Ross Hynd, adding: “Big ones!”

With weather conditions the way they are today it would be wise to check the Jim Clark Rally website and Facebook page for spectator information for tomorrow (Saturday) some car parks are a bit muddy and may have to be changed and keep your fingers crossed that water levels at the Langton ford drop overnight so that the stage can run tomorrow.
https://jimclarkrally.org/#Spectating