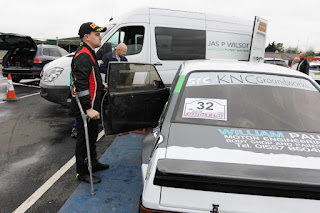 No chance. When Iain Wilson collected Chris Williams from the station in Dumfries yesterday, Chris threw his crutches into the back of the car. This followed an ankle injury some two weeks ago which necessitated the use of such aids. Of course, Iain feigned not to notice, but first chance he got, he lengthened one of the sticks by 4 notches. On Saturday morning ahead of the rally start, Chris generated much mirth amongst the ‘sympathetic’ crew hirpling about lop-sided for some time before he realised that something was up. In such a serious sporting endeavour as a forest rally, isn’t it nice to know that one’s team mates always look out for each other and have their best interests at heart?
Posted by John Fife at 10:13