Change of Plans ... 32 years ago today I was all packed up and heading north. The occasion was the annual Scottish Six Days Trial at Fort William. As usual I was reporting on behalf of a number of outlets including BBC Radio Scotland, the Scotsman, the Herald and the Daily Telegraph. As a trials enthusiast I had been covering this event since 1981 and by providing daily reports (and pictures) to a variety of outlets paid for my week in the Highland and left enough for the occasional pie supper and fill of baccy - purely to keep the midges away you understand.

Reporting on this event back in those days  was rather different. I had a notebook, a typewriter, a bag of florins and I had to put my undeveloped 35mm film on the overnight train to send down to the newspapers so that they could get photos. And the florins? I needed those for the public telephone box so that I could phone in my copy. No mobile phones, emails or even faxes back then. This was proper journalism.

The SSDT is the last great British motor sporting adventure. Six days in the saddle, or rather, standing on the pegs and trying to ride 'feet up' over some of the toughest terrain in motor sport. Putting a foot down or 'dab' incurred penalty points so the Observed Sections up waterfalls or across scree slopes had to be ridden without putting a foot down to maintain balance or momentum. This was not a sport for the speed merchant, but for the talented, skilful, artistic, thoughtful, determined, endurance rider who would attempt all these sections whether it was raining, sleeting, snowing or sweltering in an early summer heatwave! 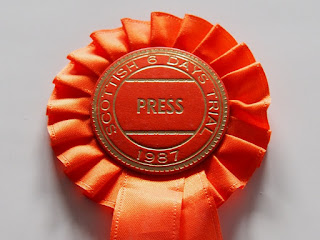 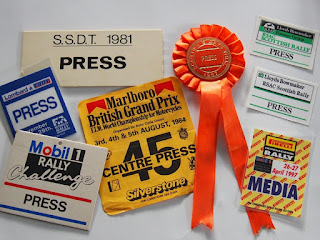 Members of the Press who were accomplished trials riders (Yes, I know, but I fibbed!) were allowed a Riding Pass which granted permission to follow the actual competitor route. That was an arduous and fierce outing on its own never mind doing the Sections. As you'll see from the pics, even the Press badge was rather quaint! (In fact, Press Passes in general were a bit different back then).

Sadly the BBC (that's another story!) and the Herald fell out of favour with motor cycling and as a freelance reporter I couldn't generate enough media interest to pay for my week so I stopped going around 1990/91. Also other commitments intervened and I haven't been back since, even as a spectator. That was all set to change this year, but I've got a funeral to attend next week and then the Scottish Rally the following weekend.

Even if you're not a motor cycle fan this is a 'must-see' sporting event in  its own right. It is unique, absorbing and staged amidst fabulous mountain scenery - if you can see it through the low cloud, mist or rain.

If you fancy a looksee it's a bit like following a Special Stage Rally. Think of the Observed Sections as forest stages. The website has maps for each day's route and the Sections are highlighted. All you have to do is plot their location and navigate your way around.

There's a two day event for pre-1965 machines tomorrow (Friday) and Saturday then the main event starts on Monday morning.

You know what, you might just see a tweed bunnet amongst the ranks if I can grab a couple of days spectating myself.
https://www.ssdt.org/about-the-scottish-six-days-trial/information-for-ssdt-spectators 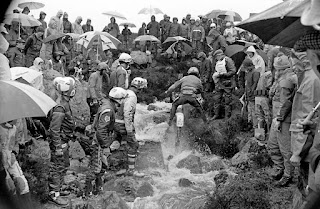 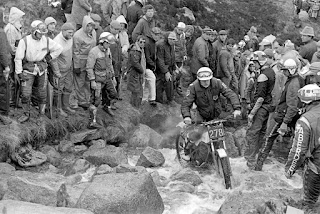 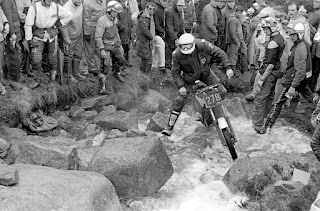 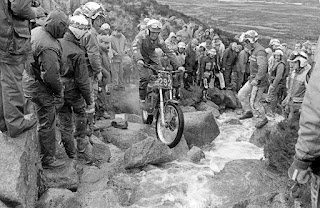 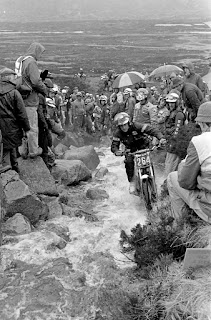 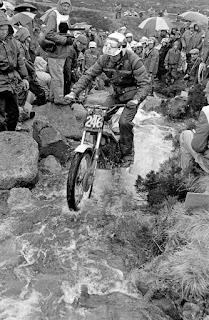