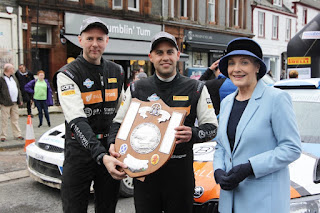 With victory on today’s RSAC Scottish Rally, David Bogie has equalled Roger Clark’s record of six wins on this event, although David was quite insistent that he doesn’t regard his achievement as being anywhere near equal to Clark’s. “Of course, it’s nice to match that record,” said David, “but the modern event bears no comparison to the challenge that the original week long International posed. I’m just pleased to have won what I regard as my home event.”

Of course he’s right. Back in the day, the ‘Scottish’ was a monster week-long event with 60 or more forest stages, no central servicing and no strict rules on rest periods, crews often having to drive some 18 or 20 hour sections with little in the way of rest, and often in the dark. And remember, there was no central servicing, service crews had to keep pace with them and keep their charges on the road. Rallying back then was as much about endurance as speed.

Today’s event was all about the speed and the biggest loser was Euan Thorburn. Six wins from six rallies so far this year, but this was another day and another rally and he was up against his long time nemesis and ‘bogeyman’. He also had another rival to contend with, Garry Pearson was very much on form this weekend after his woopsie on Speyside.

A smiling Thorburn said: “It’s my own fault. I overshot a downhill hairpin in Ae this morning then stalled it. That cost me big time.” He dropped to 3rd behind Pearson but with two stages to go the battle was still on. Then, “On the start line of the final stage, the sequential shift stopped and I had to switch to manual, then the brake pedal went to the floor!” said Euan, “I couldn’t have driven that last stage any harder.”

It worked, Pearson finished 3rd. “I struggled towards the end,” said Garry, “I thought I drove well on the first four, but the David and Euan seemed to find an extra gear for the last two stages.”

Which left Jock Armstrong in 4th place, while a puncture in SS5 scuppered any hopes of a podium finish. Bruce McCombie scored 5th after a few niggles on the way, and rounding off the top six was John  Wink ahead of Donnie MacDonald, Scott MacBeth the best of the Mitsubishis, Michael Binnie with a burst manifold, and Keith Morris.

Freddie Milne failed to finish when the Fiesta ran wide at a chicane, got on the loose and just got sucked into a ditch.

Roger Chilman was top 2WD in his Mk2 in 12th place o/a, 39 seconds ahead of Iain Wilson. Barry Lindsay was top 1600 runner in his Peugeot 206 although Jude MacDonald can be well chuffed with 2nd in class in his Fabia. Scott Peacock was top 1400 runner in his MG ZR ahead of the MG of Niall Cowan Jnr.

Oh, and one more thing. Sandy Arbuthnott finished, and finished well. There is justice in this world after all, eh?

Note: Full report in Wednesday’s ‘Motorsport News’ and extensive detailed report to follow in the on-line mag.
Posted by John Fife at 21:54