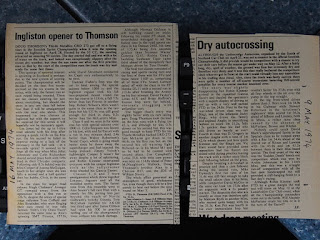 Doing a bit of soul searching and came across these, clippings from  45 years ago. When I started with 'Motoring News' I knew nothing about rallying - and before you say it, I still don't -  autocross and speed events were my brief, before moving on to motor racing reports from Ingliston and later the early days of Knockhill. In those days, reporters were known only by their initials which appeared at the end of their reports. The sport was always bigger than those who reported on it - the way it should be.

In 1971 I joined Shell who were about to sponsor the Scottish Rally Championship and that was when I encountered the likes of renowned rally journalists Gerry Phillips (who was killed in a car accident in Kenya in 1997) and Mike Greasley. Gerry was one of the early influences who encouraged me to switch disciplines, a chat which took place over a few glasses of White Horse in Aviemore after a Scottish Rally in the company of some promotional girls who were handing out clay pipes and samples of St Bruno tobacco!

But that was then, I know many of you don't buy 'Motorsport News' these days and you all have your reasons, but it's the last great survivor. We don't have 'Rally Sport' magazine any more or 'Rally Car' or even 'Car & Car Conversions', all are now consigned to the great forestry ditch of obscurity.

Which leaves us with the great anonymous, sensationalising mass of social media and the internet (although Bob Irvine is fighting back with his 'UK Rally Scene' mag) and they call it progress. There are of course nuggets to be found amongst it, and we all have our favourites, hence the soul searching and thoughts of change.

However, the MN cuttings provide a glimpse of the past with some names to conjure with. Tom Coffield who rallied the Autoglass Escort and Michael Dymock who started autocrossing in a Mini before taking up with the fluorescent Dynorod Chevette, and Alex Strathdee who serviced for SMT in Perth and then Dealer Team Vauxhall keeping one James S McRae on the road. There are mentions too of Ian Forrest's early career and who was later a stalwart at Knockhill for many years, and of course the venue for the Sprint report was Ingliston - when it used to be a race circuit. Happy days, eh?
Posted by John Fife at 17:48