To some folk it was bracing, to the rest of us it was just plain cauld although nothing like the Border Counties a few weeks back. At least the rain just about held off and yet despite the favourable competition conditions, many crews fell by the wayside at the Granite at Leuchars Rally today. 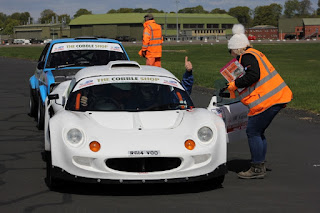 Alistair Inglis won the rally leading all the way from the second stage, but why not the first stage? Setting a blistering time on the first stage of the day was first time visitor Frank Bird in his Focus WRC. Unfortunately as the bright red projectile hurtled through the Flying Finish, the water pump belt shredded itself the temperature shot up and cooked the head gasket. A long trip for one stage, eh?

That meant Inglis was now in class of his own with the Exige and took maximum points in the Cobble Shop Scottish Tarmack Championship.

Best of the rest was Colin Gemmell in the top 2WD car but once again the early pace setter didn’t fare so well. Andrew Kirkaldy was fastest over the opener before the fuel regulator failed and the boys had to send someone home for a spare while Andrew did the next three stages well down on power.


Greg Inglis finished a surprise 3rd overall in his now Honda powered Exige but was looking at 4th till Tom Morris spun his Skoda Fabia on the last stage dropping 20 seconds – and crucially finishing 13 seconds behind the youngster.

Willie Paterson lost a bit of time in SS6 when the Escort blew a spark plug clean out of the cylinder head taking the ECU with it, but fortunately the violence of the expulsion took all the bits with it and he finished 5th. Rounding off the top six and just losing out to Paterson by 5 seconds was Michael Robertson in the Honda. Perhaps a bout of fuel vapourisation on the final stage made the difference.

There was a tremendous battle for 1600 honours with Des Campbell and Kyle Adam dead heating in 7th place overall with Des getting the nod due to a faster time on the first stage of the day, but Ben Wilkinson had been the class pace setter until the penultimate test. Such was the closeness of the competition Ben just overdid a long left hander spinning off on the outside and knocking the tracking out with one final stage to go.

Completing the top ten was Michael Harbour first time out in his new Escort Mk2, quite a change from the Citroen C2 with which he clinched the Cobble Shop Tarmack title last year.

An eventful, unpredictable, exciting day, and there’s still a lot more to tell. Look out for the full rally report in the on-line mag later in the week.


Fraser Anderson won the Junior event in his Citroen finishing 42 seconds clear of the VW Up! of Cameron Davidson with Jack Hall 3rd in his Yaris.
Posted by John Fife at 21:48