It seems an awfy long while since the last forest rally in Scotland. No doubt there will be itchy trigger fingers and feet across the nation, not to mention lack of practice for co-drivers. It's only (!) nine weeks since the Snowman, but the 2018 championship season will be kick-started back into rumbustious life next week at Elgin when the Speyside Stages takes to the woods.

Ahead lies a busy week as drivers and co-drivers pore over Route Notes and scour the DVDs. It was all so different way back in 1976.

It was quite common in those days to receive the Roadbook only when crews signed on at the rally itself, few events were posting them out ahead of the rally - in case some unscrupulous types went practicing, or for a long walk with the dog/weans/girlfriend/wife or whatever, clutching notepad and pencil. And yes, that did happen.

I recall a friend who was a traffic cop spotting a Midlands registered brand new car parked outside a forest north of Aberfoyle just off the Duke's Pass. Intrigued, he hung around. In due course a figure appeared walking out of the woods with Ordnance Survey maps poking out of his pockets, and who just happened to be wearing a rather recognisable rally jacket. Anyway, he stopped the 'rambler' and enquired as to the nature of his business.

Claiming innocence of any potentially disreputable acts he responded that he was just out for a walk and taking the air. Whatever, the big Polis just happened to be a rally fan, recognised the tall figure as one of the county's best known 'professional' co-drivers who partnered an even better known driver and with a nod as good as a wink sent him on his way back to Englandshire telling him to tarry no longer in the area - as the International Scottish Rally was just a few weeks away!

But back to the Autumn Stages. The Roadbook was a pretty spartan affair and co-drivers often had to spend a few hours, some all night, to plot the route on the various maps and again on other sets of maps for the Service crew and Management car and no doubt sponsors in some cases.

The whole 11 stage rally route consisted of one and a third foolscap (pre-dating A4!) pages listing map references and landmarks which had to be followed while another page provided a timetable of sorts. As for stage information, that consisted of 'ball and arrow' diagrams. Does anyone recognise the Castle O'er and Hog Knowe (Twiglees as it is now) tests from these?

I apologise for the quality of the images, but photocopiers were the size of dog kennels and expensive back then, so such information had to be typed on to stencils which were then printed off on duplicators (ask your parents!) - with ink flying everywhere. You could always spot the poor sod who produced the car club's paperwork. Ink stained hands for weeks and ink spattered clothing. Such innocent times.

In the early days, rallying was as much an adventure as a speed event. So the question is, has the sport lost something, or is it better? Tough call, eh? 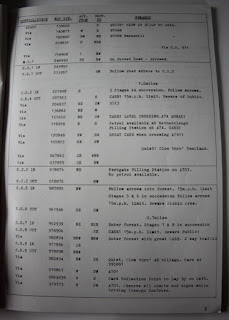 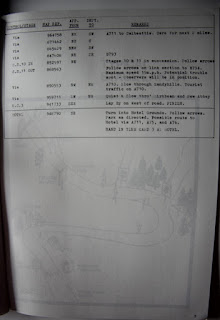 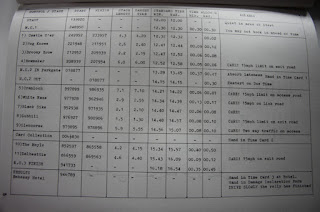 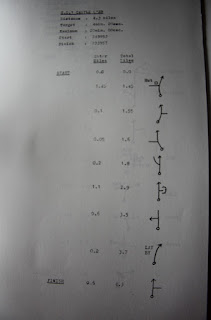 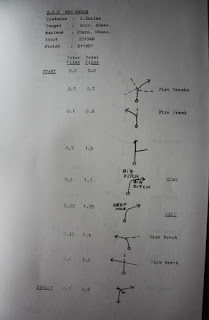