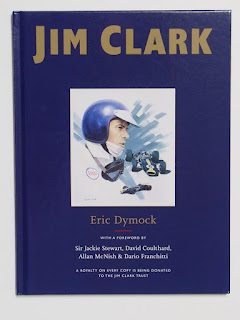 This weekend marks quite a milestone in Scottish motorsport and one that will be commemorated by a number of events this Saturday/Sunday 7th/8th April. 50 years ago we lost one of our brightest stars. Our first F1 motor racing champion. A proper gent. And modest too.

Those were more innocent times, but dangerous. Very dangerous. Despite winning two F1 World Championship titles and the Indianapolis 500, Jim Clark lost his life in a minor, non-championship F2 race in Germany. The world mourned then and still does now, but nowhere is it felt more deeply than in Berwickshire.

Oddly enough I was reminded of this upcoming anniversary just the other weekend at the DCC Stages Rally at Ingliston. There are still sections of the original 1965 race track all too evident and familiar to those of a certain generation. To say I never saw Jim Clark race is not quite true. I did. Once, and it was here.

I was too young to see him earning his spurs at Charterhall in the 1950s, and so it wasn't until 1967 at the Edinburgh Students' Charities Race Meeting at the Edinburgh track that I saw him competing in a race. And there he was, at the wheel, smiling and waving to the crowd - from the cockpit of an electric milk float.

There were about half a dozen of the devices trundling around the circuit in that feature charity 'race'. He was leading while the others were trying to 'slipstream' past. This was high octane stuff - in ultra slow motion. And that was the only time I saw the man in the flesh.

His life and achievements will be celebrated at a number of events this weekend. The Jim Clark Trust is hosting a weekend of activities at Chirnside. On Saturday and Sunday, there will be an exhibition and a display of over 100 cars at Chirnside Hall and a commemoration service at 3pm on Saturday afternoon at Chirnside Church. Meanwhile at Duns on Saturday, the ground will be broken on the new extension to the Jim Clark Museum at 11am. If you fancy going along look out for Eric Dymock, he will be signing copies of his latest book.

He was a friend of Jim in those early days and has written about the man many times. In fact, Eric was one of my own earliest influences. Not just because he came from nearby Motherwell but the fact that a bloke from this dull, black, soot-laden corner of the steel-making and mining landscape could break away to enter the glamorous world of automotive journalism (as it was then!) and motor race reporting.

I used to read his reports in the weekly 'Motor' magazine. He could write then, and he can still write now. The man had a natural gift for adding colour to what was then a black and white world. If you can get a copy, get it signed this weekend, and treasure it.

On Sunday Knockhill will host the first SMRC race meeting of the 2018 season. They too will be marking this special anniversary with a number of additional attractions, so if you are doing nowt else, visit the Borders on Saturday and head north on the Sunday to the Kingdom of Fife.

Something else to look out for is Lori Carnochan's evocative tribute (see link below). Lori works for ITV in Carlisle and she's as motor sport daft as the rest of us.

Will we ever see his like again? Nope. Not a chance. Motor racing changed after that terrible day and not necessarily for the better. Yes, it's much safer, and we must all be thankful for that, but the innocence has gone and the spectacle is different. F1 is no longer a sport, it's showbusiness.