There won’t be any news from Jedburgh ahead of the Border Counties this evening – I wullnae be there. Instead I’ll be heading down early doors tomorrow direct to Kielder so don’t expect any pre-really update. Depending on signal availability, I’ll get some info and quotes up during the day, to back up Brian Thomson’s excellent Flying Finish results service. And if there is a deathly silence on the airwaves, that will be because I refuse to climb any tall trees to wave my dongle about looking for a signal!

Certainly conditions can’t be any worse than last year when a blizzard blew in direct from Siberia (via the Arctic Circle) on Friday night. It was so cold even the polar bears had left Jedburgh, and Captain Birdseye was chipping ready frozen Trout out of the Jed (iced) Water below the Abbey. 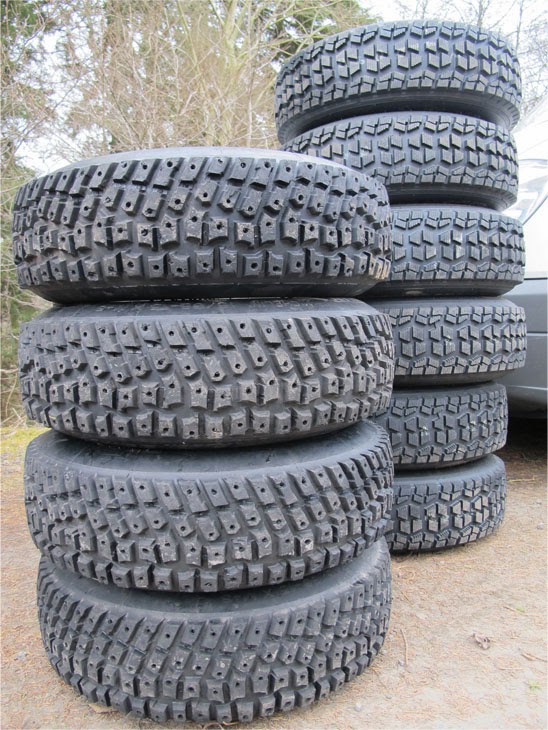 In fact it was colder than that, it was cold enough to freeze the bollards off a traffic island. At the pre-event Test Day on the Friday, the talk was about tyres, and folk had even brought snow tyres.

Talking to a senior official last night, hail had hampered the arrowing crews yesterday stinging them on the face, hands and other bits with their icy shotblasting. The weather this week hasn’t been kind, but still way better than last year.

So the big question will be, how close will young MacCrone get to the World cars? He certainly has the talent and the sphericals to give them a fright, but David Bogie and Euan Thorburn won’t be too bothered with him, they’ve got their own rivalry to sort out.

That rivalry re-commenced on the Wyedean which Bogie won and Thorburn retired, then Thorburn won the Snowman and Bogie was fourth, while most recently, neither won the Malcolm Wilson – Thorburn was second and Bogie fourth – again!

So the two will resume their battle tomorrow, but Quintin Milne won this event last year and is back for more, Mike Faulkner will be in with a shout and Jock Armstrong might just have his new Subaru. Then of course there is Barry Groundwater and Chris Collie. Outwith that lot there could be another top tip for victory, Peter Taylor will debut his new Ford Fiesta S2000 and Brendan Cumisky is coming out in a Lancer.

But perhaps the biggest rivalry will be between Steve Bannister and Matthew Robinson. When Matthew beat Steve on the Malcolm Wilson by 3 seconds you would have thought he’d just won the WRC. The two are really good pals, but that doesn’t stop them wanting to beat the hell out of each other in the stages. So that’s something to look out for, a couple of MkIIs on the limit.
Posted by John Fife at 19:02