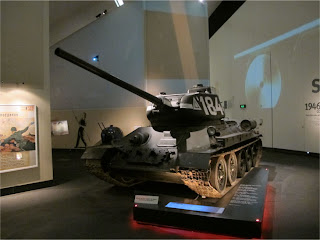 Ford launched the new Fiesta at the Imperial War Museum in Manchester and a few of us managed a walk round during the lunch break, but it wasn't a museum that you could just walk round, look at a few artefacts and walk out again.This is one of those museums that make you stop and think.

There aren't a great many large exhibits inside the building, just one tank, one field gun, one aircraft - and a Trabant! However, it was the smaller exhibits, personal possessions, and very personal stories that were absorbing and moving. The museum makes great use of informative panels alongside each exhibit, film and audio clips, and there is even a section where the smells of the trenches in the First World War have been recreated, from cordite and damp clothing to gas and decaying bodies. 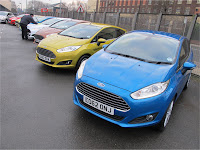 Another moving exhibit was a section of the twisted steelwork from the Twin Towers tragedy in the USA and there was much more  bringing the war against terrorism up to date. One exhibit made me smile though, it was Kate Adie's spiral bound reporter's notebook opened at a page where she had written up a report on a firefight - and it was in plain English, not shorthand. 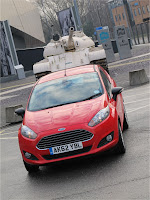 Then it was back to the day job. The new Fiesta is a cracking wee car, but like all modern cars these days it is festooned with technology. Ford were pushing the 'MyKey' system whereby each car is supplied with one Master key and one second key.This is not a traditional spare key, this one can be programmed by whoever holds the Master key. A speed limit can be set, an audible warning of when that programmed maximum speed is being approached, a maximum volume for the onboard music system, and sneakiest of all, it will record the actual mileage of the car while the second key holder is driving it.

Thank goodness that system wasn't around when I was growing up - what chance do the kids have now? So much for trust, eh?
Posted by John Fife at 18:00