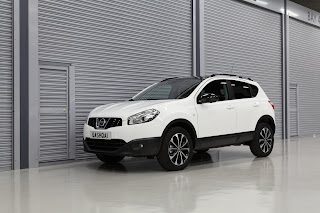 Once the preserve of exotica and the more exclusive large off road vehicles, Nissan is to introduce all round cameras on its mid-size Qashquai crossover.
Called the Qashquai 360, it will sit between the current Acenta and Tekna specification models replacing the n-tec+ but offering more equipment for the same £19,945 starting price.
The new model features Nissan’s ‘360° Around View Monitor’ system, which integrates satnav with Bluetooth and smartphone connectivity along with four cameras to give a ‘helicopter view’ when parking. Standard equipment also includes 18-inch ‘Onyx’ alloy wheels, rear privacy glass and a panoramic roof.
For most of us the camera system will be nothing more than a gimmick but for those who struggle to parallel park or reverse in and out of tight car park spaces it could be boon. Not only would it save scuffing their own cars, but it might just help to protect the innocent parties who often return to their vehicles to find that some anonymous tumshie has departed the scene leaving behind the scarred evidence of 'touch' parking - and no note on the windscreen!
Posted by John Fife at 19:04